ASK ME IF I BELIEVE IN THE FUTURE | ITSLIQUID

ASK ME IF I BELIEVE IN THE FUTURE

How can design shape our future? What ideas, questions and strategies occur to designers as they develop future visions? How do we want to live tomorrow? The Museum für Kunst und Gewerbe Hamburg (MK&G) often engages with these pivotal questions, asking artists, designers and exhibition makers for their input. Now, for the exhibition “Ask Me If I Believe in the Future“, the renowned Milanese curator Maria Cristina Didero has invited a group of international designers to reformulate their expectations and visions for the future: the Greek design studio Objects of Common Interest, run by designers Eleni Petaloti and Leonidas Trampoukis; designer Erez Nevi Pana from Israel; Carolien Niebling from Switzerland; and the multidisciplinary design studio Zaven from Italy with designers Enrica Cavarzan and Marco Zavagno. The curator gave the designers and studios carte blanche for new productions created especially for the exhibition at MK&G. Although they take quite divergent approaches and vary in their views on the challenges posed by global crises, the solutions proposed by these designers attest to an astonishing coherence – a shared faith in the future.

Maria Cristina Didero from Milan is in demand internationally as a design curator, consultant and author. She was recently appointed Curatorial Director of Design Miami 2022, one of the world’s premier design fairs. Didero has curated exhibitions for museums and companies worldwide, including “Nendo: The Space in Between” at the Design Museum Holon in Israel in 2017, and “Fun House” at the National Building Museum in Washington, DC, in 2018. She also has collaborated with international design magazines such as Domus, Wallpaper, Vogue, Flash Art and Apartamento. From 2018 to 2020, Didero was editor-in-chief of ICON Design while currently, she acts as Milan editor of Wallpaper.

Objects of Common Interest conceived their installation “Teahouses for domesticity” based on an existential insight that the coronavirus pandemic has brought into sharp focus: our human need for closeness and community. The designers invite visitors to interact with a sensory landscape. As they walk through three inflatable oversized PVC tubes, each viewer has a personal experience of space and time as well as presence and absence. Specific elements and materials play a special role here: recyclable silver film that seals off the interior from the outside world, iridescent holographic foil that changes colours depending on the viewing angle, and malleable memory foam in which every movement leaves visible traces. With their participatory installation, Objects of Common Interest present an optimistic outlook on the future, putting at our disposal new forms and conceptual methods for sharing space with others. Founded in 2015 by Eleni Petaloti and Leonidas Trampoukis, the studio Objects of Common Interest works at the interface between architecture and design. After studying at Aristotle University in Thessaloniki, the École Supérieure d’Architecture de La Villette in Paris and Columbia University in New York City, Petaloti and Trampoukis launched LOT Office for Architecture in 2012. Just three years later, they opened their design studio Objects of Common Interest, based in New York and Athens. In 2022, Objects of Common Interest were chosen as Wallpaper* Designers of the Year.

In his installation “Homecoming“, designer Erez Nevi Pana envisions a futuristic panorama of humans, animals and nature living in harmony on the Earth, which must therefore be protected and preserved. He was inspired by astronaut Neil Armstrong‘s famous comment that the Earth looked as tiny as a pea when viewed from the Moon. As humans increasingly try to expand their habitat into outer space, life on another planet is conceived of as one way to rescue our own. Pana invites us to look at the Earth from above – you can see a planet that has been left by human beings in search of the unknown, a planet to which we can always come back not as refugees but as inhabitants. His setting features for example a pool of water as a metaphor for the life force and a landing pad for imaginary spaceships, as well as a flag symbolising the vision of the living Earth as a coherent unit. Erez Nevi Pana investigates natural phenomena and environmental processes by exploring different materials. As a doctoral candidate at the University of Art and Design in Linz, he is researching vegan design and working on crystallising salt in the Dead Sea.

When asked if they believe in the future, Zaven responds with a question: Why not? The design studio finds faith in the future by relying on the principle of collaboration – a leitmotif of their working method. For the installation at MK&G, they cooperated primarily with local experts, including a young ceramicist who works with natural clay and neighbourhood tailor. This inspiring transfer of knowledge allows them to collaboratively develop new forms and methods based, among other things, on traditional craftsmanship. Their installation is made up of archetypal objects that will remain essential in the future as well: a lamp to bring light into the darkness, vessels to hold food and drink, a cloak for warmth and protection, and a chair to sit and rest on. “Why not?” provides an opportunity to look at the world from a different point of view. Why not take action and participate ourselves in shaping the things that surround us? Zaven, founded in 2008 by Enrica Cavarzan and Marco Zavagno, is a multidisciplinary design studio based in Venice that works worldwide in creative direction as well as product, graphic and installation design. The duo holds workshops and lectures at design schools in Italy and beyond. Zaven has won multiple awards and has participated in numerous exhibitions internationally.

Carolien Niebling calls herself a food futurist. Working in the fields of research, teaching and consulting, the designer specialises in alternatives to conventional foods. Food production is one of the main causes of CO2 emissions. Our eating behaviour influences climate change, meaning that individual actions can already have an enormous impact in the short term. Niebling’s installation “Future-Proof Plating” gives us a fresh look at natural foods that are not yet part of our daily diet. Macro photographs of algae and edible plants printed on textiles beguile the eye with their striking textures and shapes. Stylised arrangements of wild plants are imprinted on ceramic plates or cast in relief. Rather than adopting a moralising tone, Niebling’s installation lodges an aesthetic appeal for us to think about an alternative future for food and for our planet. Carolien Niebling, who lives and works in Zurich, earned her master’s degree in product design in 2014 and has since been a lecturer at the École Cantonale d’Art de Lausanne (ECAL). Her book “The Sausage of the Future” was published by Lars Müller Publishers in 2017.

Italian filmmaker Francesca Molteni accompanied the designers as they developed and produced their exhibition projects. Her documentary will be presented in the exhibition. Molteni studied philosophy in Milan and film production at New York University. Since 2002 she has been producing and directing documentaries and various television formats, including work for the Italian television station RAI.

Jan Kloss and Matěj Činčera from the Prague design studio Okolo are in charge of designing the exhibition. For this exploration of questions about the future, they look to the past, translating a classical architectural element like the columns into a contemporary language. The Okolo collective, founded in 2009, works in the fields of design, architecture, art and fashion, producing exhibitions, publications, installations and events. 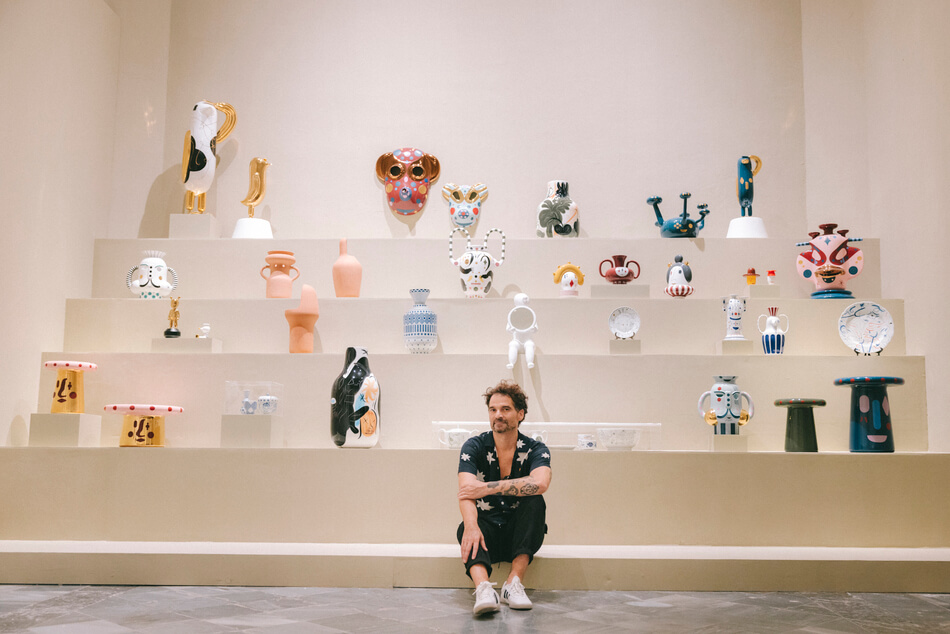