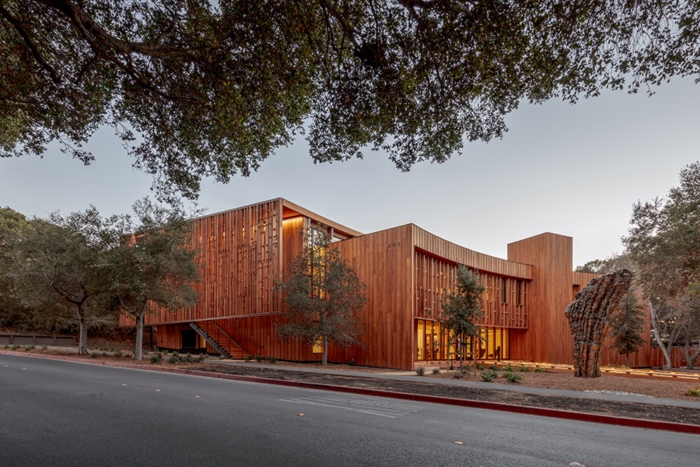 Stanford University’s campus is synonymous with Spanish Revival architecture: red tile roofs, stucco, and colonnades greet visitors and students at every turn. But the Denning House, a new Ennead–designed building, plays by different rules. Clad with a sweeping curtain wall and delicate stained wood screens, the building brings a new aesthetic to Stanford, as well as a fresh approach to sustainable design. “Nobody ever said that [we] would have to play by all of the usual Stanford rules,” says Richard Olcott, design partner at the New York–based firm. 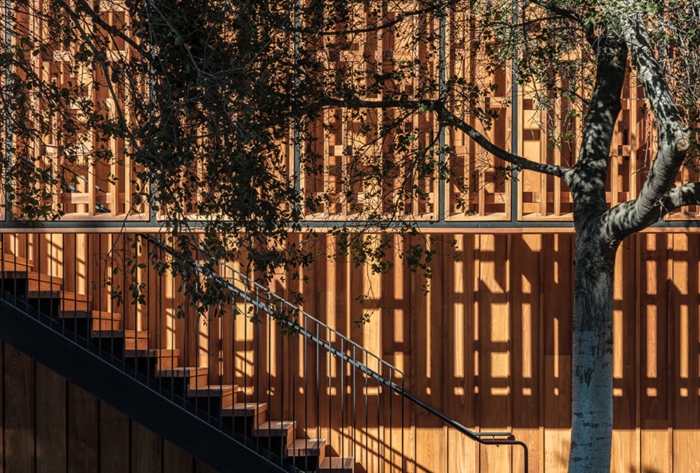 The Denning House serves as a headquarters for the Knight-Hennessy Scholars Program, which brings the best and brightest students to Stanford to pursue graduate degrees, forge relationships among each other, and ultimately help solve the world’s most challenging problems. The building houses spaces for Knight-Hennessy Scholars to gather, socialize, and collaborate, as well as the program’s administrative offices. The structure is sited on the campus’s southwestern edge, adjacent a seasonal lake that serves as a breeding ground for the endangered tiger salamander. So, Olcott and the Ennead team had to account for a diverse ecosystem of students working within the house’s walls, plus a delicate habitat that existed outside. 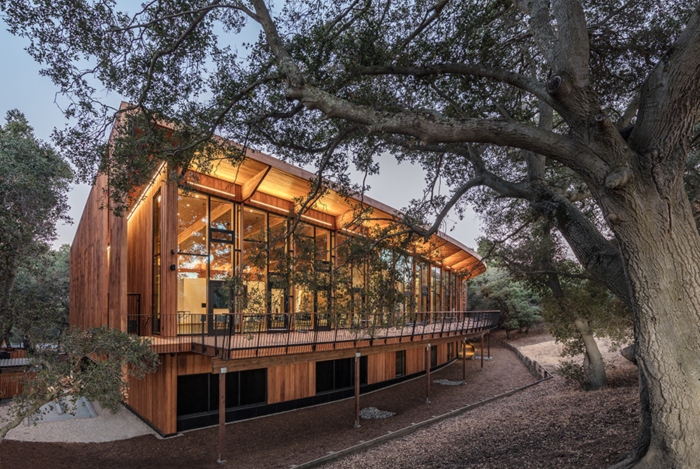 The building’s sustainability credentials begin with the site itself: Formerly a parking lot, the area was reverted to its native landscape, with the new building occupying the previous lot’s footprint. Recessed structural footings protect the surrounding tree grove. “[A] concerted effort was made to disrupt the habitat as minimally as possible during the building process,” says Olcott. Stormwater is captured on-site to prevent soil erosion; from there the water supplies a district-scale water system and recharges local groundwater levels. In terms of its physical structure, the Denning House is almost entirely mass timber, save a solitary steel spring that supports a centerpiece staircase. The mass timber, which carries much lower embodied energy levels than other building materials, was sustainably harvested by Sierra Pacific Industries. 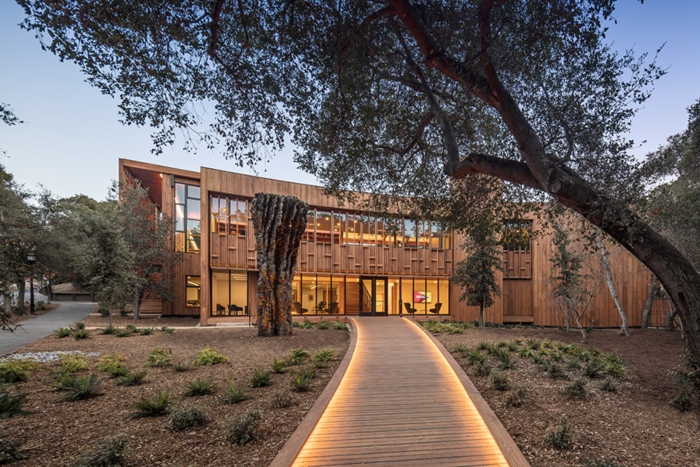 Wood was also the natural choice for the Denning House’s facade. “It was everybody’s thought from the get-go that we should make it warm, inviting, and house-like,” says Olcott, “and that to us said wood.” (It helped that the university and the adjacent city of Palo Alto both feature trees on their crests.) As with the building’s mass timber structure, sustainability is baked-in: The honey-hued Douglas fir and Louisiana cypress cladding frame special ORNILUX bird-safe glass whose UV reflective coating (practically invisible to humans) drastically reduces bird strikes. The large windows also admit a significant amount of sunlight, which in turn reduces the building’s electrical usage.

Students and faculty primarily enter the Denning House via a snaking wooden pathway that leads to a lobby and grand staircase. The lobby is flanked by administrative offices and glass-walled conference rooms, though the staircase beckons upward to a sun-soaked, second-floor balcony that lines the building’s back perimeter. The balcony’s sweeping boardwalk – a subtle nod to the site’s former boathouse days – abuts a classroom, lounge, and flexible-use ballroom that can accommodate everything from a hundred-guest dinner party to a large formal lecture.

As for the salamanders? “The design is intended to… encourage the ability of the salamander population to traverse the site,” says Olcott, ensuring that humans and amphibians both have plenty to like in the Denning House.