“Through a journey in my ‘Floating Forms’ series, I would like to invite people to rediscover familiar objects, people and everyday gestures in an almost dreamlike dimension. My works attract from afar with their contrasting masses, then, as one gets closer, a world of shapes, colours and details reveals itself. It tickles the imagination, inviting to confront the painting directly. Let the curiosity lead you into this enchanted place, and give free rein to sensations, thoughts and emotions. I like to think of my paintings as a connector between my inner world of curiosity and imagination, and the public who enjoys the works. Therefore, I attach particular importance to the physical display of my paintings. I believe that the direct, physical confrontation with the work of art – body to body – generates an exchange of interesting energy. Usually, at the beginning of my creative process, there is not much intentionality, but rather a free flow of emotions. I like to call this stage ‘chaos’, but I could also call it “chance”. Something happens on the canvas, which comes from my subconscious. Then comes a dialogue with the support, with the shapes, with the colors and a more conscious intention to make sense of the masses. And faces, characters, objects… emerge. I feel like a sculptor who draws the shape of his statue from a marble block”.

LUCA CURCI – Which subject are you working on?
ANTONELLA QUACCHIA – I am currently working mainly on a series titled “Floating forms”. Through a journey in my ‘Floating forms’ series, I would like to invite the viewers of my artwork to rediscover familiar objects, people and everyday gestures in an almost onic dimension. My works attract from afar with their contrasting masses, then, as one gets closer, a world of shapes, colours and details reveals itself. It tickles the imagination, inviting the visitor to confront the painting directly and let the curiosity lead into a magic space where sensations, thoughts and emotions can freely flow. Besides the “Floating shape” series, I am exploring more geometric forms of expression where reality is reduced to coloured lines and shapes. Someone commented about these very coloured and joyful paintings as resembling a modern form of Klimt’s geometric figures. I am determined to explore more in this direction, in the future.

LC – How did you get to your current artistic practice?
AQ – A few years ago, I started by taking workshops and courses on drawing and figurative painting, trying to find my voice through experimenting with many different techniques. Nevertheless, my artistic practice was limited by work and family responsibilities. It was only when I could resign from my last job assignment and totally dedicate myself to painting, that my artistic practice really thrived. I then discovered that abstract painting is my best form of artistic expression, as it leaves so much room for curiosity, interpretation and flow of inner emotions.

LC – How is being an artist nowadays?
AQ – Being an artist is a wonderful opportunity to express one’s inner world and to communicate with people. Although there are so many ways to showcase one’s artwork via digital media, nowadays there are fewer opportunities to get in direct contact with people and to exchange face-to-face with the public. I firmly believe in the physical confrontation with the artwork. Only then, one can observe and appreciate all the subtleties of the strokes, of the material and take the time to read an artwork. Nowadays, artists are also confronted with unscrupulous gallerists and events’ organizers who present themselves as “promoters” of emerging artists, but actually only care about getting as much money out of the artist as they can, without giving much in return in terms of visibility and support.

LC – Do visitors’ suggestions enrich yourself and your art?
AQ – Definitely yes! The moment of confronting the public during a physical exhibition of the artworks is very precious and extremely enriching both for the artist and for the visitors enjoying the artworks.

LC – Did your style change over the years? In which way?
AQ – My style has changed considerably over the years. In the beginning, I was painting mostly in a figurative way and my subjects were flowers, people and landscapes. At that time, I was experimenting with a number of techniques such as oil, watercolors, pastels and acrylic. I then began to explore the possibility to freely express myself through colours and different materials without being constrained by forms and references to reality. I have now found my voice through what I would call abstract expressionism.

LC – What do you think about the concept of this exhibition? How did it inspire you?
AQ – I was inspired by the possibility to showcase my work in Venice.

LC – We were attracted by your last artistic production, has the artwork presented been created for the exhibition or as a part of preexisting works?
AQ – The artwork presented is part of my “Floating forms” series and, although created in 2021, it preexisted the collaboration with ITSLIQUID. 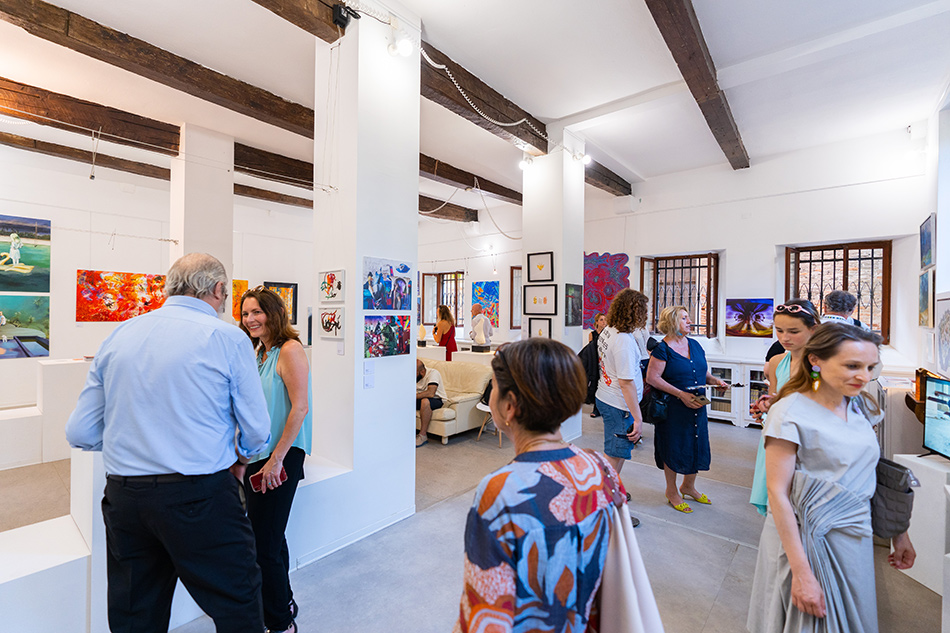 ITSLIQUID Group, in collaboration with ACIT Venice – Italian-German Cultural Association, is pleased to share the outstanding outcomes of the 10th Edition of CONTEMPORARY VENICE 2022, international exhibition of photography, painting, video art, installation/sculpture and performance art, that took place in Venice, at Palazzo Albrizzi-Capello from July 15 to August 05, 2022. Read more 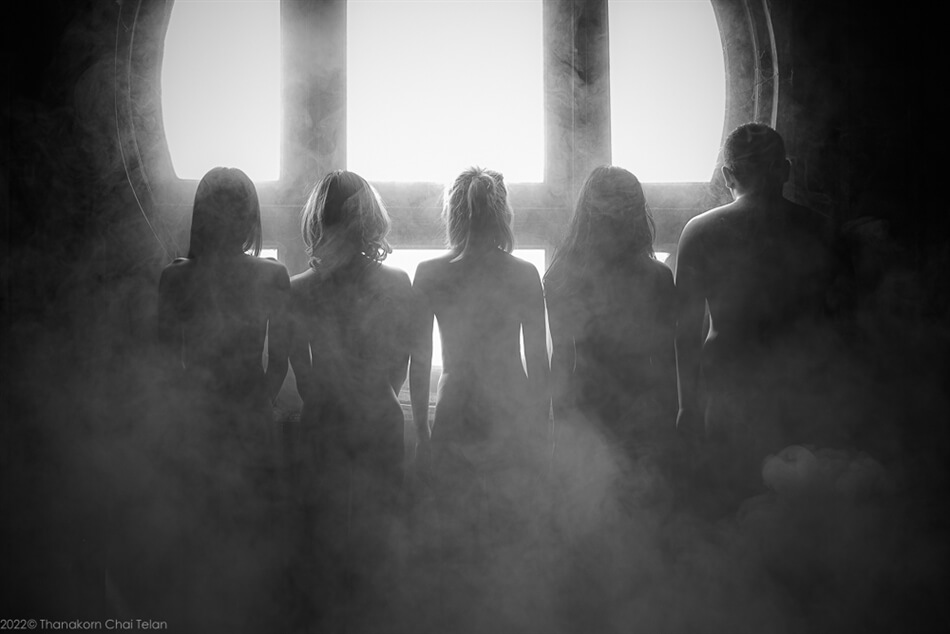 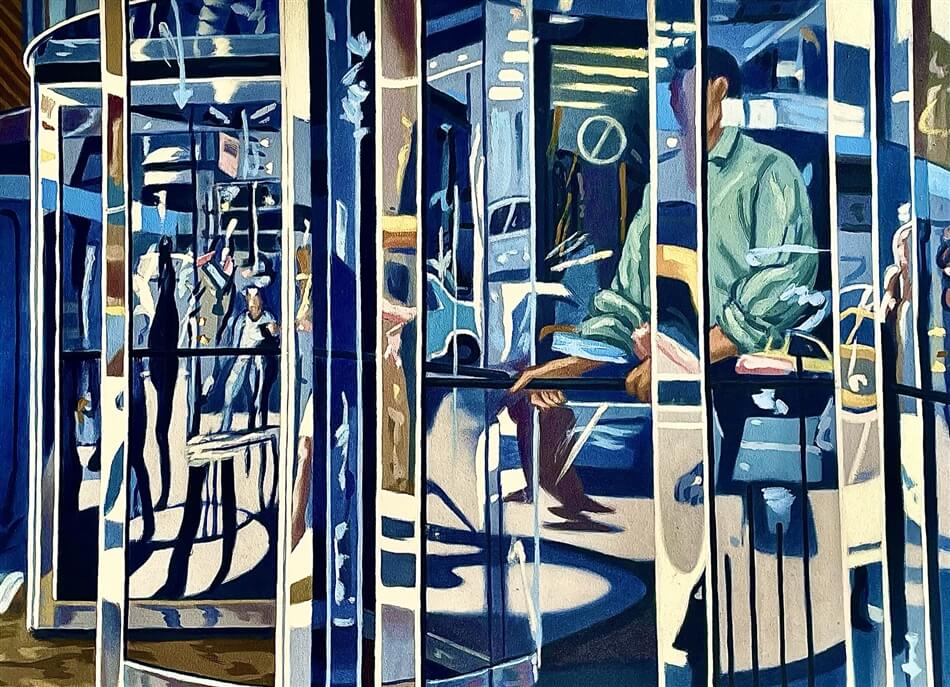 "During my so years of painting, I have used the following mediums: pastel (on canvas), ink, oil, acrylic, enamel (on plexiglass), and both underglaze and onglaze ceramic. Read more