Corina Karstenberg was born in 1967 in The Netherlands, near the Belgian border in Geleen hospital. She first learned to walk and talk in Stein, a small village nearby, and then her family moved to Heerlen, a former mining town. After obtaining her first qualification as a florist, she became a qualified carpenter and upholsterer. At the age of 20, she started to study Restoration of Wood and Polychrome at Brussels Academy of Visual Arts. During her studies, she started to read books written by Simone Beauvoir, Jean-Paul Sartre, Albert Camus, Friedrich Nietzsche, Gabriel Garcia Márguez and many others. At the same time, she studied the basics of painting at the Art Academy in Leuven under the supervision of Pol Mariën. This period became meaningful for her artistic development. Corina started to work as a restorer of ethnographic art at the Royal Museum for Central Africa in Tervuren (Brussels). She worked closely with art dealers who specialised in African Art from the famous Place du Grand Sablon. Her experiences in the world of African Art made Corina decide to quit her job as a restorer. Instead, she enrolled at the Radboud University in Nijmegen to study. It was her aim to better understand what had happened to the people in Africa, and how they had come to be treated as objects. Her bachelor year dealt with comparative Religions: Christianity, Islam, Judaism, Hinduism and Buddhism. Corina continued at the Department of Arts her education with the History of Culture and Mentality (of Europe). In Swansea (Wales, 1999/2000) she wrote her final paper ’The history of the development of gender categories. These two subjects – Religion and Culture – gave her renewed insights into how the world is influenced not only by Religion and the dominant Western Culture but also by binaries of gender, race and identity. Returning to the Netherlands Corina worked for an anti-discrimination organisation based in her former home town of Heerlen.

Luca Curci – What is art for you?
Corina Karstenberg – Art is a way to express my thoughts about the world I am living in, as a storyteller rooted in history. Hereby I make portraits of people worldwide with symbols incorporated that often are related to their cultural and religious background and have influenced their life stories.

LC – What’s your background? What is the experience that has influenced your work the most?
CK – I am a cultural historian with a background in the restoration of objects. My work as a restorer at the Africa Museum in Tervuren (Brussels) has influenced my life enormously. In 1991 I started to work in this museum when I was just 23 years old. At that age, I knew almost nothing about history due to my practical background as a cabinetmaker, upholsterer and restorer of wood. By doing research on the ethnographic objects that I worked with I discovered the cruelty of the colonisation of Congo by King Leopold II of Belgium. I became morally conflicted by this knowledge and was convinced I would have blood on my hands if I continued this work. Therefore, I decided to quit my job at the museum. After this experience, I wanted to understand what happened to the people who were colonised and how this could have happened. I started with a bachelor’s in Religion Studies at Radboud University followed by a Master’s in the History of Europe as a colonizer worldwide. In 1999/2000 I wrote my master thesis at the University of Swansea with a focus on the development of gender categories with a special interest in the new category Transgenderism. During my studies, I started to make portraits. My first portrait was 27 years ago, of a woman murdered by the Khmer Rouge. I gave it the telling title: Potential Refugee, as she had not had the chance to flee her country.

LC – Where do you find your inspiration?
CK – My main source of inspiration is Twitter. For me, it is a huge library of thoughts and opinions from, and about, the past and the present. I follow writers, artists, average people, thinkers, doers, scientists, women, men, LGBTI, people with a broad range of political ideas, as well as libraries and journalists.

LC – How do you feel when you see your work completed?
CK – Great! I always fall in love with my own work and I jump up high in the air with joy!

LC – What do you think about the concept of this exhibition? How did it inspire you?
CK – I love the connection that is made with the invisible energy behind both the natural and man-made or artificial elements of our planet. The portraits I make are influenced by the places people are born and the impact of natural resources and the environment on their life choices. Marike Heitman, the recent winner of the Libris Literature Prize 2022, expressed an interesting point of view in a recent interview about how nature influences humankind and vice versa. She speaks about equality an idea most applied to humans, but she suggests nature influences humans more than the other way around and she emphasizes the importance of diversity in nature. Diversity is key in my art. The portraits I paint and draw have stories to tell. Not only about their personal circumstances of life but also about the place where they are born but, and how traces of the past become visible in their lives and influence their choices.

LC – Can you explain something about the artworks you have in our exhibition?
CK – Hidden History is a painting with a story underneath. It is about how eleven refugees were murdered during a huge fire nearby Schiphol in a temporary prison for people called illegals at a time when hate for the Other in the Netherlands was growing. The original painting was repainted to express the trauma survivors experienced and to heal their wounds as far as possible so that their lives were bearable again. Lupita Nyong’o’s painting is about the history of slavery in relation to the continent of Africa and the birth of Amerikkka. Camille Claudel’s portrait title is: Excuse the dust on my blouse. I sculpt my marble myself., is related to the undervaluad role of women in art and society. Ursula K. Le Guin had a forward-looking vision of gender roles in her writing, and how she plays with gender in her stories has long been a source of my inspiration. Käthe Kollwitz had an intense life and sadness is expressed in her beautiful black and white charcoal drawings. Her work is about the cruelty of war and the loss of innocent wonder in life. She is saddened that young people must go to fight while they have other, better dreams. Nina Simone – Flower of Inspiration is about how Nina always wanted to be the first black classical pianist in the US but could not live her dream because of segregation and being denied a place at Juliard. Her fist in the air stands for Black Power, and the round yellow circle represents the rising song. The Blue Portrait is inspired by a woman that I follow on Twitter. And last but not least, the portrait of the woman murdered by the Khmer Rouge in Cambodia: Potential Refugee.

LC – Did you enjoy cooperating with us?
CK – I liked working with you a lot. I especially appreciated the contact with Veronica Piras. She was very professional and the whole experience was pleasant.

LC – What do you think about the organization of our event?
CK – The organisation of the event went very well. The environment of Palazzo Bembo is beautiful and the way the paintings were displayed looked truly beautiful. 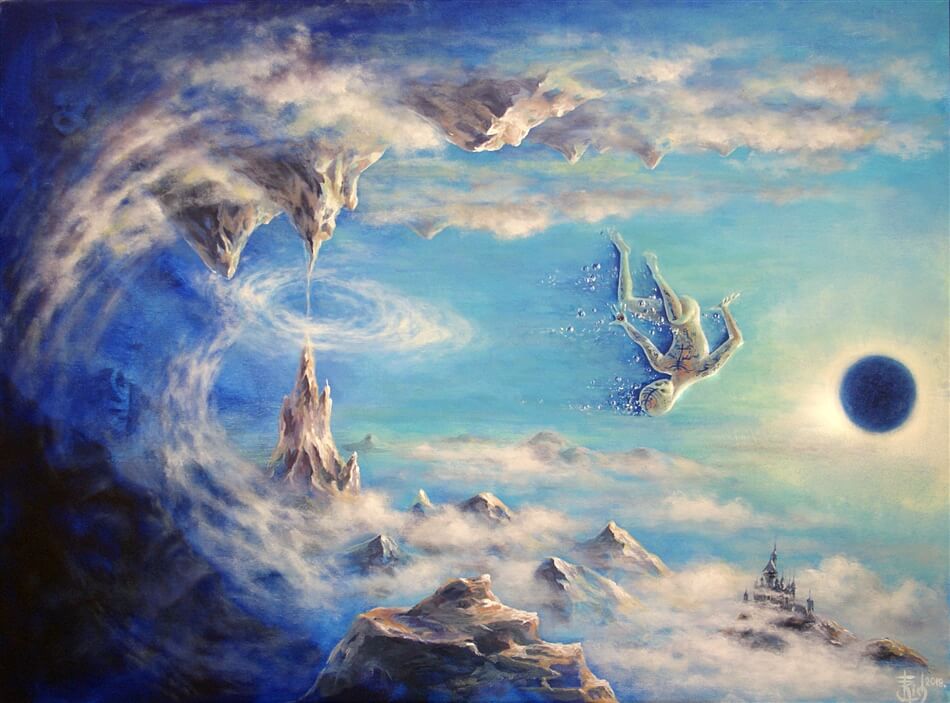 "My inspiration is not in the present or in past events to describe, not in deep feelings or emotions to demonstrate, neither in already existent beautiful objects to depict. It is the future that inspires me." Read more 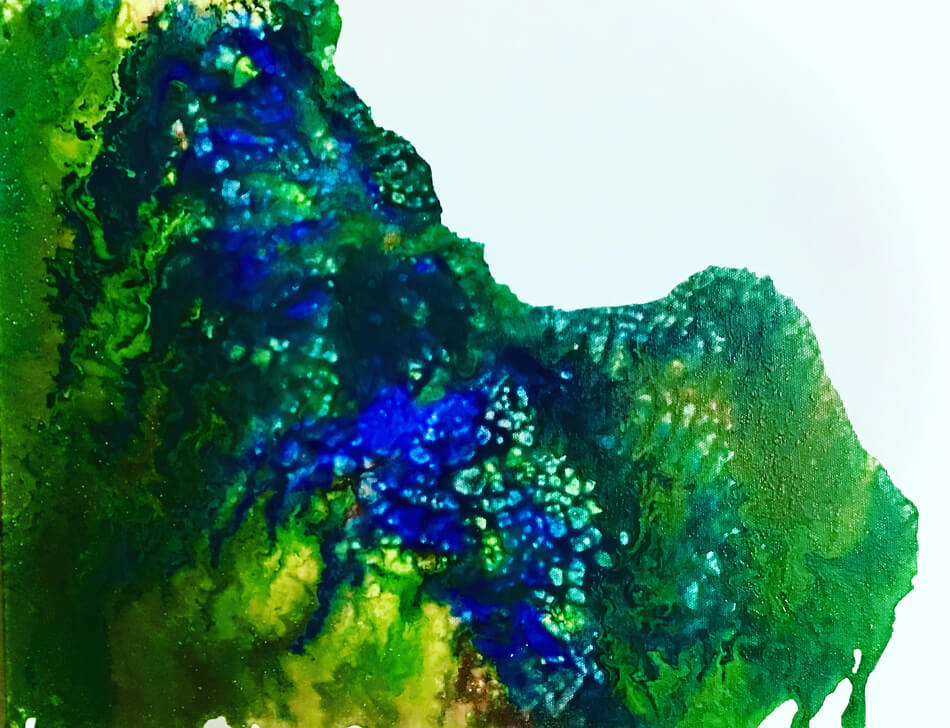