Doris Marten is an abstract painter based in Berlin. After finishing school she trained as an animator at the Curt Linda Film GmbH in Munich and subsequently studied Painting, Graphics and Object Art at the Academy of Fine Arts in Nuremberg and the University of the Arts in Berlin. She was awarded several scholarships e.g. from the Goldrausch Künstlerinnenproject and the Studienstiftung des Deutschen Volkes. In 2002 she lived in Rome as an Artist in Residence granted with a schoolarship of DAAD. In 2019, her work was added to the Collection of the German Bundestag. Her work explores perceptual phenomena such as colour and time, and was exhibited in international group shows and solo exhibitions. In addition, she realizes cross-disciplinary projects, especially with musicians and composers. Doris Marten is a lecturer at the Berlin Art Institute, founding member of the international artists’ collective Intermission and member of the association Deutscher Künstlerbund.

Luca Curci – What is art for you?
Doris Marten – Art is the reflection of humanity. It shows our perception of the world we live in, our culture, society, our aims, wishes, dreams, problems, believes etc. Art is a very complex medium of communication. It enables a dialog between artist and recipient, but also between cultures and nations, also between different times and epochs. At best, a work of art contains the essence of humanity in a decisive way. I think that’s also the reason, why some works of art outlast their time and some don’t.

LC – Which is the role the artist plays in the society? And contemporary art?
DM – The Artists draw the picture, that future generations will receive from us. But we are also a kind of mirror for the society we live in. The way artists are able to act and work, as well as the themes, the materials they use and the aesthetics of their works, reflect the society and the time they are part of. When one considers how intensively society is reflected in art and how important art is for ourselves and for future generations, the public perception of contemporary art in our society is appallingly low. It often appears more as an add-on to a cultivated live style than as an essential, intellectual good and a necessary part of an active cultural life.
Moreover, contemporary art is only perceived by an elite minority. In many daily newspapers in Germany reviews of art exhibitions are written in a neutral descriptive form, if there are reviews at all. On television e.g., exhibitions of contemporary art are not or only marginally addressed for different reasons. That means, that Contemporary Art is not included in the daily life of the majority of the population. That fact tells a lot about us and that’s what I mean with mirror of the society.

LC – What are you currently working on?
DM – For the last two month I have been painting a huge amount of circular paintings for the second part of my current show “Every Choice a Chance” at West-Lotto in Münster, Germany. According to their colour about 300 individual circular paintings, painted on discarded long-playing records, will be arranged on a 5 x 15m wall as parts of a large overall picture. This work belongs to the series “SOUND AND VISION”, in which I examine the emerge of individuality and the role of the individual within a superordinate overall system. I started this series 2018, so it is still relatively young, and I am very happy to have the opportunity for such a large-scale installation there. Another important series I am currently working on is the series “Light’n’Lines”. These are very colorful vertically lined oil paintings with very intense and vivid colours and light effects on primed Alu-Dibond panels. They show my deep interest in perceptual phenomenons like colour and time, as well as the proximity of my work to photography and digital aesthetics.

LC – Where do you find your inspiration?
DM – As far as the choice of my colours is concerned, I draw a lot of inspiration from nature. In my case it is not a direct translation of color observations, but more a drawing from a pool of color memories. I grew up in southern Germany. The light effects of such landscapes between mountains and lakes had a lasting impact on my perception. I have always been interested in how we perceive colors, as warm or cold, spacial or material, intense or restrained, shaded or lightened. On the other hand I find a lot of inspiration in the digital world and its special aesthetics. The fact that nowadays we define pictures as visual constructions of a certain number of colored dots per inch had a great influence on my artistic work.

LC – What is the most challenging part about creating your artworks?
DM – While working on a painting that belongs to an already existing series, I can mostly enjoy the work very much. Sometimes, there are technical problems that need to be solved. During this phase, especially if it lasts a long time, it is difficult not to lose the initial artistic aim. And of course, every new painting is a challenge in itself, it is important to stay courageous and curious while working on it. If you are too sure of what you are doing, the painting gets boring and trivial. But the most exciting moment is when a new idea gives rise to the possibility of a new series. Then you have to trust yourself and your artistic intentions, it is a test of artistic courage every time, no risk no fun. Each new series influences the complete artistic work and its further development. You have to decide whether the new idea is worth following, investing time and energy or not. One can never predict exactly how the series will develop and what influence it will have on the entire artistic work.

LC – What is your creative process like?
DM – I am interested in colors and their interaction. To show this interaction I’ve been using stripes and lines for more than 20 years now. Each day I choose a certain number of colors I want to work with. Of course, the choice of colors always depends on the particular painting I am currently working on. There are no sketches in advance, neither in colour nor for the shapes. Every step is a reaction to what is already there and to what is supposed to be, a creative addition so to say, step by step, one line after another, one painting after another. Repetition is a central motif of my work. Within a living process it brings about change, individuality and dynamic. Some of my series, for example the “GRIDS”, “LAYERS” and the series “SOUND AND VISION”, contain not only two dimensional paintings, but also wall objects composed of independent individual paintings. Composing these objects is like building an image out of images. It involves decisions like abandoning individual results in favor of a superordinate whole, partly allowing them to disappear, or also defining them as individual paintings and not using them in the object. 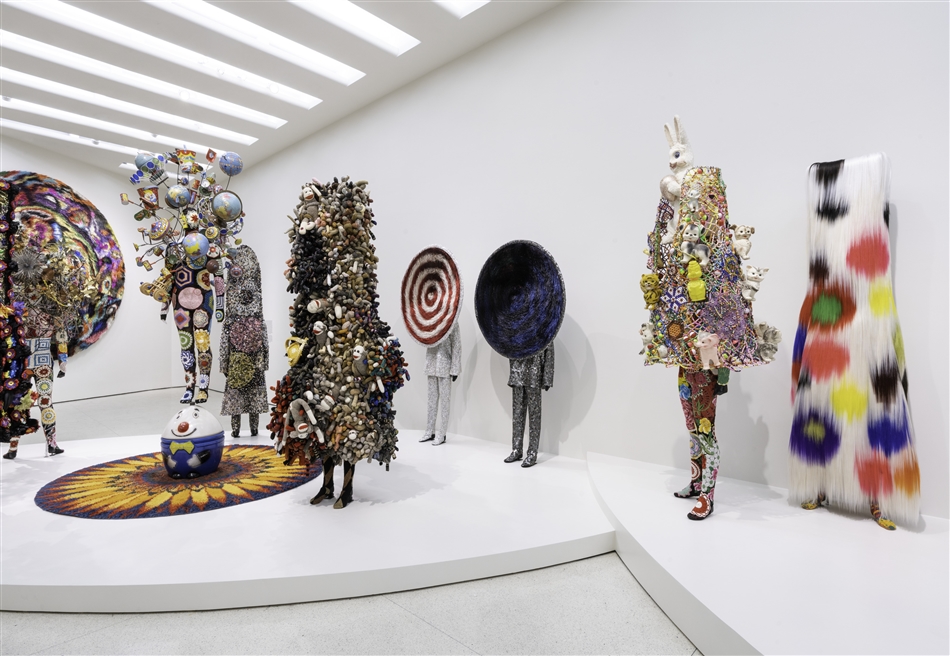