I was born in 1989 in Siberia and grew up in Germany. After 13 years at the School of Music and Art I followed my artistic path autonomously alongside studying Philosophy and Mathematics in Berlin. It was during this time that I discovered my love for the line. Later I went to London to study Logic and became inspired by the autonomous work of artists like Cy Twombly, Gerhard Richter and Zao Wou-Ki. During my Masters of Logic in Amsterdam I won the Luxembourg Art Prize which offered me my first Solo exhibition. Ever since then I continue my work in philosophy and art and seek out for new opportunities to exhibit my work. Luca Curci – What do you think about the concept of this contest? What drove you to partecipate in this contest?

Janzen Albert – The art world is hard to enter. Most often artists cannot apply for a gallery by themselves. Instead they have to be recommended by someone else. This is particularly difficult if you have no university degree in art. It’s Liquid Contest gives artists the chance to be recommended by a renowned jury and to be seen in exhibitions around the world. This is the perfect springboard for artists and that’s the reason why I participated. L. C. – What is the message linked to your artworks?

J. A. – In my works I examine a fundament of images, the line. Lines are among the most intuitive means to perceive and understand our environment. Every recognition of visual structures depends on a recognition of lines. They are so basic that there is nothing we can conceive beyond them. Anything can be constructed with lines but nothing constructs lines. The ultimate simplicity of the line provides its independent aesthetics. It does not represent an idea as it is not constructed by anything else than itself. To reveal this aesthetic power the line has to be self-referential. I draw lines not to construct something, but to draw lines. The shapes and patterns occurring in my drawings have no other purpose than to reveal the movements of lines. The observer of my lines is confronted with an independent entity. J. A. – From an early age I had a strong interest in drawing, so my parents sent me to an art school. I went there for 13 years and learned all kinds of techniques and art forms. After that I decided to follow my artistic path autonomously alongside studying Mathematics and Philosophy in Berlin, London and Amsterdam. Studying and traveling have been a great source of inspiration. I enjoy independent structures wherever I can find them. They represent freedom, movement, energy, life! I love the aesthetics of independence and art that reveals it. Among my biggest inspirations are Cy Twombly, Gerhard Richter and Zao Wou-Ki. J. A. – My impression is that being an artist nowadays involves being present in social media more than ever. Without regularly promoting your art work and yourself on all social media platforms you have almost no chances to be recognised. Another reason is that there are so many talented artists around the world that all want to be seen. So it becomes more and more difficult to stand out.

J. A. – Art for me is showing the world from a new and interesting perspective. It is a special form of communication between the artist and the observer. The artist presents her own perception of life which is always linked to her experiences and the environment she lives in. Luckly, we are all so diverse and so is our perspective. That’s what makes art so interesting. J. A. – My artistic process starts with an idea. My ideas just come by themselves, all I need to do is to keep my mind open. When I have an idea I want to draw lines. During the process of drawing lines I often forget my initial idea and let the lines create something new. They surprise me and make me discover what I haven’t seen before. This is what I like most about my lines.

J. A. – I believe so, that’s why I participated. And I encourage everyone to take the chance! 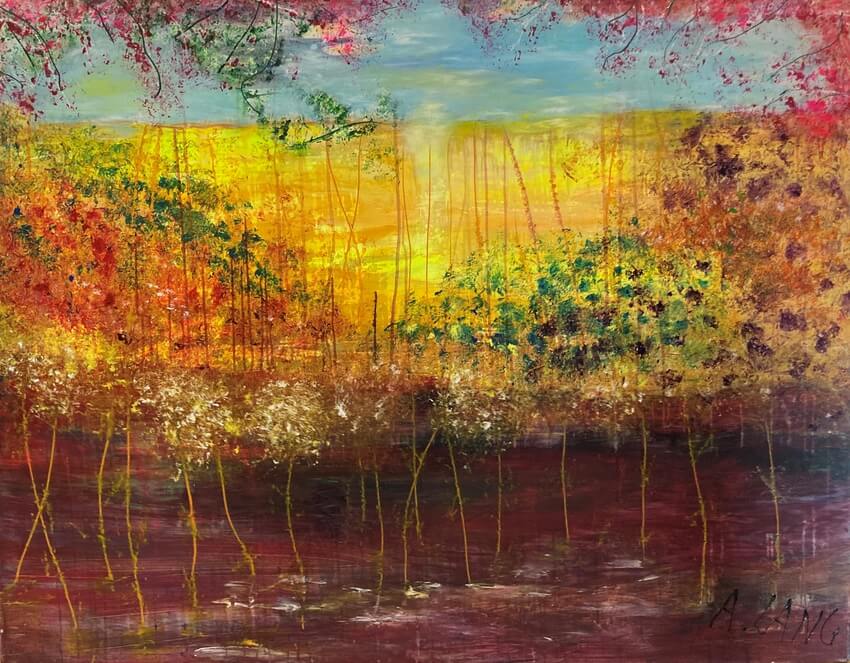