Karina Kristoffersen McKenzie makes digital art, prints and textiles based on teachings of tibetan Buddhism. She lives by the sea in the southern part of Norway. Karina attended two schools of art in Norway. She earned a Master in Psychology from Sweden meanwhile earning the degree as Art Therapist from Denmark. She has exhibited in London and New York and has made the tapestry interiors of Spiregården yogasenter in Norway. Two of her pictures is being included in the book “Be Kind” from Tecassia Publishing this summer and she is exhibiting her art at the ECOFeminism festival in London in November this year. She is occupied with sustainability and about sustainability in the interface of psychology and art. As a psychologist a lot is about repairing what people do to each other. If we had more compassion and a stronger notion of interdependence and connection which Tibetan buddhism talk about, we would create better worlds for ourselves and others, but often we choose otherwise, creating suffering for ourselves and others instead. Our minds are set on creating happiness for ourselves, very often at the cost of others because we don’t recognise and acknowledge our interdependency and the deeper connection we have to eachother. If we had more compassion we would create more sustainability both for others and ourselves because we would think with a mind set on the whole and not just ourselves. She hopes her art reflects the importance of Compassion and our interdependence to the earth and each other.

Luca Curci – What is art for you?
Karina McKenzie – Making art is for me a way to express something which words are far away of being able to describe. I find it often to be a more direct language than words. Through art I use my right brain hemisphere when a lot else in my life is managed by using my left brain hemisphere.

LC – What’s your background? What is the experience that has influenced your work the most?
KM – My Norwegian and Scottish background has influenced me a lot and shaped me to who I am. I studied psychology in Uppsala in Sweden, and there I met my Buddhist teacher which has inspired me enormously and who gave me a direction and meaning to my life and my art beyond any description. It was like having been given a precious fundament from which things could grow and blossom. I find my inspiration in Tibetan Buddhism, in meditation and from my own inner stream of consciousness.

LC – Are your artworks focused on a specific theme?
KM – I am occupied with sustainability and about sustainability in the interface of psychology and art. As a psychologist a lot is about repairing what people do to eachother. If we had more compassion and a stronger notion of interdependence and connection which Tibetan buddhism talk about, we would create better worlds for ourselves and others, but often we choose otherwise, creating suffering for ourselves and others instead. Our minds are set on creating happiness for ourselves, very often at the cost of others because we don’t recognise and acknowledge our interdependency and the deeper connection we have to each other. If we had more compassion we would create more sustainability both for others, for ourselves and the whole, because we would think with a mind set on the whole, and not just ourselves. If we would develop our sense of interconnectedness with all beings and would develop an increasing radius of compassion including not just ourselves, our friends and family, but also communities, countries, the planet and the whole, then Compassion could become the thread that could weave ourselves, each other and the planet together instead of tearing us and our connection to the earth apart. For me that is sustainability.

LC – Did your style change over the years? In which way?
KM – Before I went to two art schools and painted with acrylics and oil based acrylics. My art was more influenced by jungian psychology with it’s different archetypes and symbols. After I met my Tibetan Buddhist teacher I started making more Buddhist inspired digital art. The digital medium helped me create a more lucid and transparent expression where the light is more able to shine through.

LC – What do you think about the concept of this festival? In which way did it inspire you?
KM – I applied just before the Covid-19 showed up in Italy and was supposed to exhibit during the time when the north of Italy was struggling with the disease. So much was closed down and in the meanwhile nature was thriving in the abscence of human beings. Of course tragic but also inspiring to see how nature may thrive and find it’s own way. When everything was closed down I felt a deeper connection to nature and our interdependent relationship to it. That we as humans cannot thrive without nature or if we destroy the natural habitat which we sorely depend on. It’s the same as our interdependent connection to other beings. If they don’t survive, we don’t either. If they thrive, we do to. Covid-19 has for me been an important reminder of this and for me this festival has shown up a little hand in hand with the Covid-19.

LC – We were attracted by your last artistic production, has the artwork presented been created for the festival or as a part of preexisting works?
KM – It was created some time ago before the festival and has not been presented before. It is based on a photograph I took in Bodhgaya in India three years ago. Two young monks stood in front of a socalled «Wheel of Life» thanka which is often depicted outside a tibetan buddhist temple and which presents Samsara or The Wheel of Life. I found it a special moment when they stood there leaning towards each other talking about the different aspects of the thanka, unaware of my presence. And then catching the moment when one of the boys caught the sight of me. A moment of eyecontact and who watches who when viewing Samsara. They are looking into it and out of it, almost presenting how Samsara is both something both out there but also something inside as aspects of our own minds.

LC – What do you think about the organization of our event?
KM – It seems very well organised, professional and well thought through.

LC – Did you enjoy cooperating with us?
KM – You seem good and skilled at arranging this art fair and other art fairs and put a lot of work into it. I enjoyed working with you.

LC –  What is your idea about ITSLIQUID GROUP?
KM – ITSLIQUID group is a bit new to me so I’m afraid I don’t know so much about it yet ☘️ But the concept seems well organised, skilled and thought through and I appreciate the cooperation I’ve had with you. 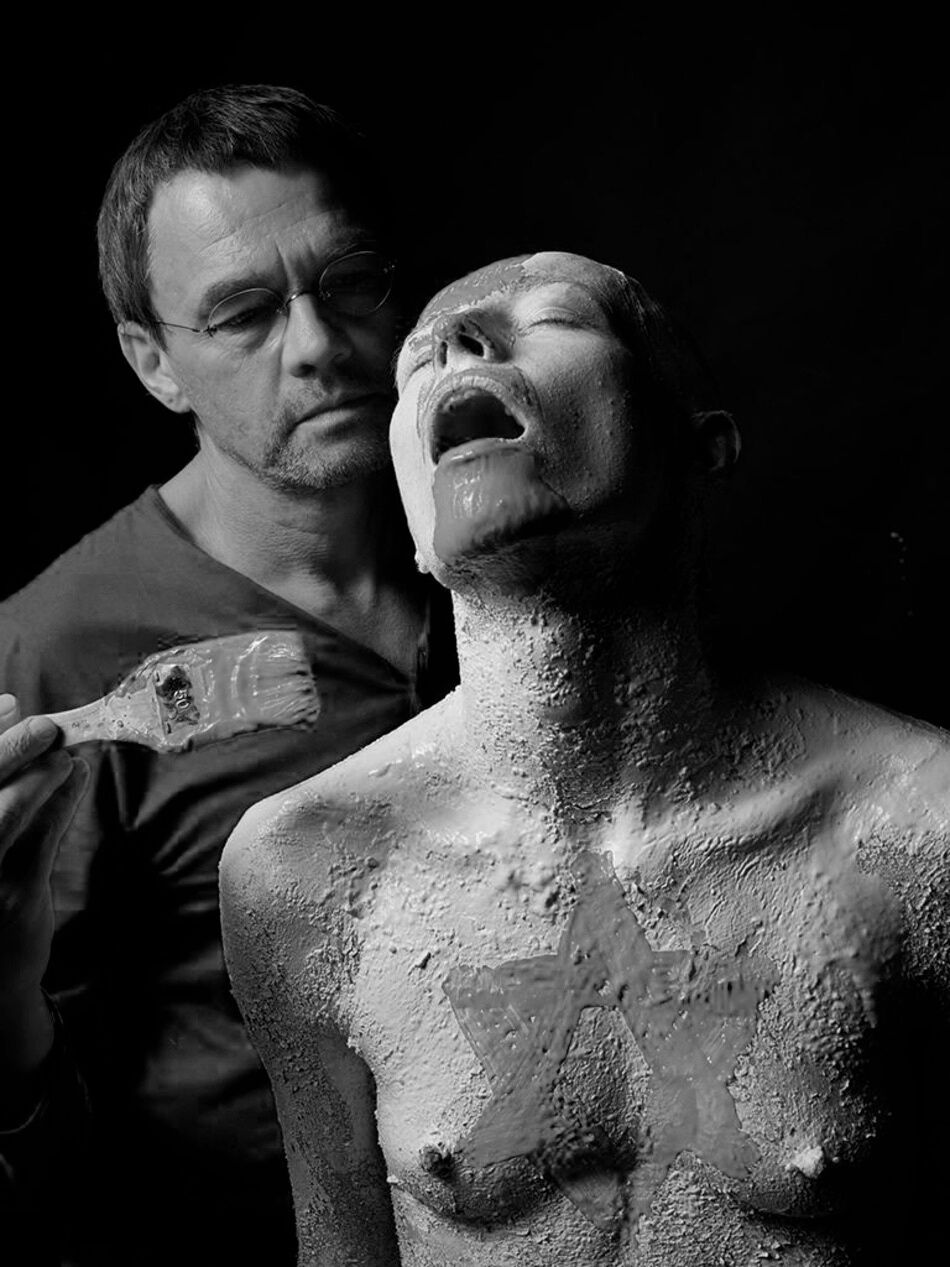 Oleksandr Blank was born in Kyiv in 1962. He was raised in a family of Soviet Jewish Ukrainian intelligentsia. His grandmother, Tila Isakovna, a cinematography archivist, was a strong influence on the development of his artistic sensibilities and visual acuity. Read more

What began as a project in her favorite city, New York, she has realized in over 80 cities worldwide since 2000: we are talking about her Streetprints, with which German conceptual artist Caro Jost became known. She makes real imprints on prepared canvases of street surfaces in various places around the world that have personal, social, or art historical significance. Read more