In my artistic work, the essence and soul of man is at the centre, his struggle for a vision, his utopias and abysses, his confrontation with the self and the encounter with the other. It arises both from spontaneously emerging inner images as well as from ideas about the psychic and intuitive functions of man and about his archaic experiences. It also feeds on a state of mind and emotions, in which consciousness walks on the small degree between the conscious and the subconscious, revealing something like an inner myth that leaves its mark in the form of artistic work. This process takes place in the hope that these traces, which have become visible in this way, will also touch or even infect the other, ideally a form of infection that allows the viewer to immerse himself in his own inner myth.

Luca Curci – What is art for you?
Katrin Loy – Artistic work is my passion and my elixir of life. From doing it and from looking at the artistic work of other artists that are important to me, I draw my inspiration and liveliness. For me, the further development of humanity, the human spirit and the soul is inconceivable and not possible without the creation of art and culture. Thus, I also see them as a fundamental necessity for change processes.

LC – What’s your background? What is the experience that has influenced your work the most?
KL – From 1991 to 2001 I studied at the Academy of Fine Arts in Düsseldorf with Magdalena Jetelova, Nan Hoover and Jannis Kounellis, whereby my time as a student in the Kounellis class had a special influence on my artistic work. His poetic approach to art, culture and mythology particularly inspired and touched me. He tried to put his students in a position “… to tell the emerging new epic not with descriptive details, but with poetic power”. He saw “the class as a central place of deepening”, as a “reservoir of insatiable desires… to find the inherent form,… in other words, to rediscover the drama, the soul that gives strength to the breath inherent in every true image”. (Quote by Jannis Kounellis, catalogue for the exhibition “Meisterschülerinnen der Klasse Jannis Kounellis”, Kunstverein Münsterland, 2001).

LC – Where do you find your inspiration?
KL – Apart from my professor Jannis Kounellis, there have been various artists who have inspired me over the years: as far as dance theatre is concerned, I was fascinated by the dancers and choreographers Pina Bausch, Wim Vandekeybus and Ohad Naharin, as far as the visual arts are concerned, by the artists Rebecca Horn, Marina Abramovic and Louise Bourgeois. Lately, I feel particularly inspired by the works of the Israeli artist Yehudit Sasportas, which were created between 2001 and 2009 and in which she deals with a swamp landscape that metaphorically stands for the unconscious in her work. During this time, beautiful ink drawings and films were created that make these soul landscapes visible. In addition, I have recently been fascinated by the work of the German artist Anselm Kiefer, especially of his most recent works, which are inspired by his engagement with Jewish mysticism. Apart from that, my artistic work is strongly influenced on the one hand by my intensive preoccupation with psychoanalysis and its various currents and on the other hand by my preoccupation with the world religions and with various currents of Western and Eastern mysticism. My father is a theologian and religious scholar and my mother was a psychoanalyst, so I came into intensive contact with these topics very early in my life.

LC – How is being an artist nowadays?
KL – What is difficult is that almost everything has already been done and that there is nothing that is really new. In addition, art history has many outstanding artists to offer, and it seems hardly possible to keep up. There are more and more artists and the number of people interested in art seems to be declining. A large number of the exhibition visitors are artists themselves and I see the danger that the exhibition business will increasingly develop into a kind of closed system that is made by artists and gallerists for artists and gallerists. On the other hand, the further development of society seems to me to be hardly possible without the further development of art and culture. Instead of expansion and duplication, it seems to be more about deepening essential topics in a differentiated form, which I see as an opportunity at the moment.

LC – Did your style change over the years? In which way?
KL – My photographic work has developed from the sculptural works that I did at the beginning of my time at the Academy of Fine Arts. Even today I still have phases in which I work sculpturally, but I do not show these works in exhibitions. Stylistically, my work is characterized by Surrealism and Abstract Figuration, two very different, almost contradictory stylistic currents that create a field of tension in my artistic work. At the beginning of my time at the Art Academy I did object works that had a surrealist character, at the end of my studies I made photographs and film works that had an abstract figurative character. At that time, it was about only making visible what is really necessary for the work and omitting everything else. When it became clear to me that with a further reduction the work would not only be intangible (like the film projection) but also actually no longer visible, an opening to the fullness of the surreal pictorial worlds followed. Since then, my work has developed cyclically by both styles.

LC – In which way the artwork presented in the Alchemic Body exhibition is connected with the festival’s theme?
KL – The photographic work presented by me in the exhibition is part of the series “SARAH” as color photography, on the other hand it is part of the series “Sunken Seas” as a black and white photography. In the series “SARAH” I deal with the embodiment of fantasies and with the staging of longings, needs and encounters. In addition, the element of water plays a major role in this, which in turn leads to my series “Sunken Seas”, in which water and the sea also play a major role and, among other things, stands as a metaphor for the unconscious and the primordial ground. This series I have also briefly explained in my artist statement.

LC – Did you enjoy cooperating with us?
KL – Yes, I enjoyed working with you and really appreciate the kindness, the valuable tips and the support you have given me.

LC – What do you think about ITSLIQUID Platform?
KL – I have the impression that there are many interesting and unfortunately little-known artists who participate in the exhibitions and see the platform as an opportunity for these artists to expand their level of awareness. 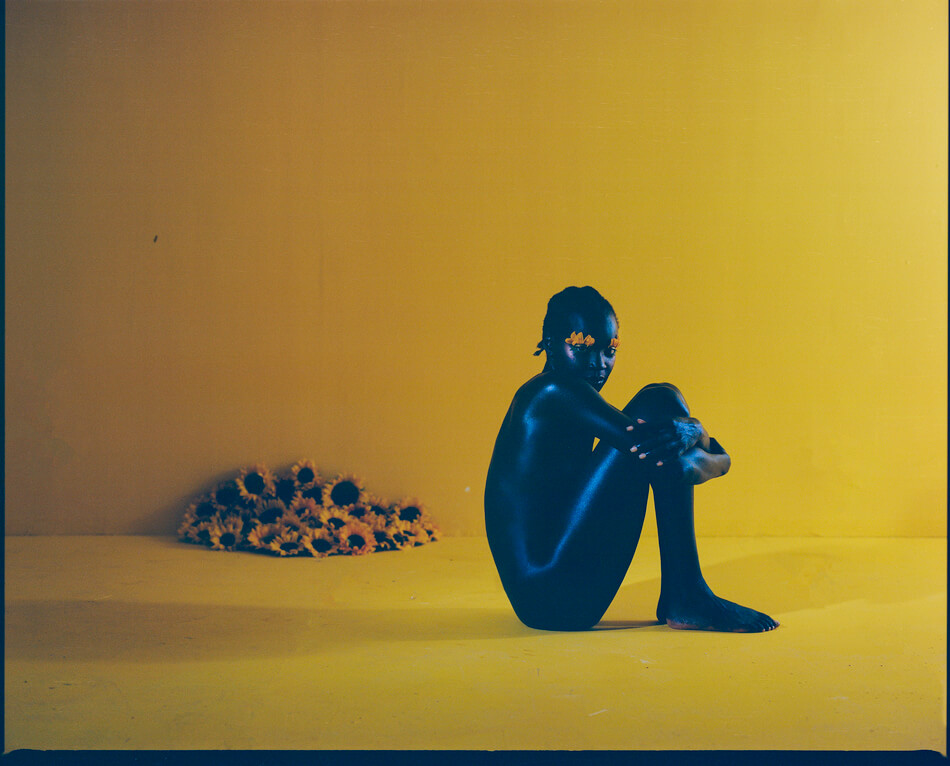