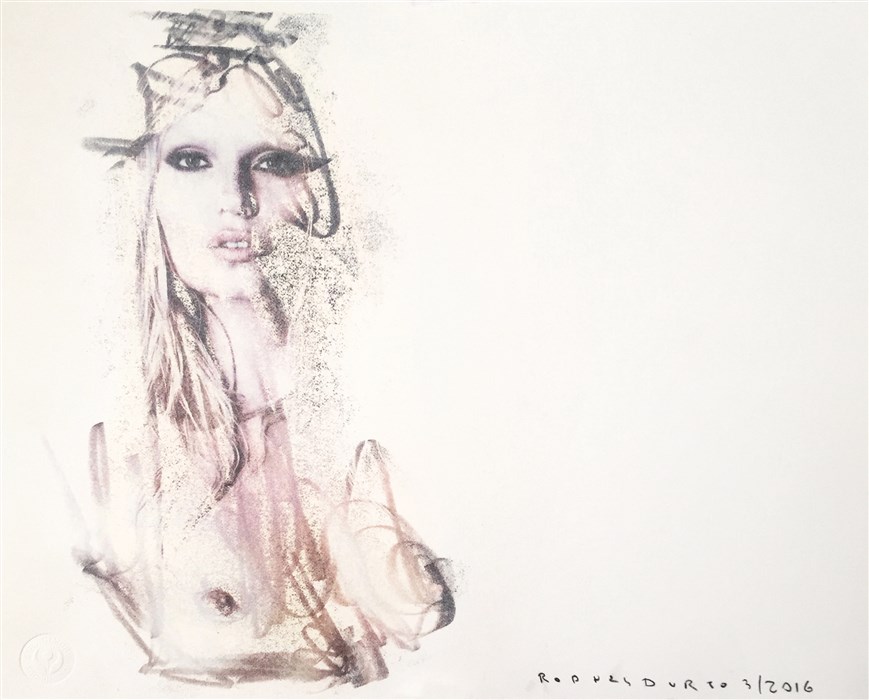 Luca Curci Talks with Rodney Durso during THE BODY LANGUAGE 2019 at Misericordia Archives.

Rodney is a graphic designer by trade, and was founder and creative director of Stormhouse Partners, a branding and design agency based in New York. In 2006, while working and teaching as an adjunct professor at Parsons School of Design, Rodney rented a studio in West Chelsea thus began his transition into painting and fine art. Having created 500+ drawings, paintings and collages since then, Rodney’s work has taken on new depth and meaning but is still grounded in a strong sense of graphic organization, color, type and imagery that speaks to his earlier work as designer. Rodney is the Founder and Board President at ArtBridge, an arts organization that gives emerging artists unprecedented exposure by exhibiting their work on construction scaffolding and fencing. Rodney is also a Co-founder and Advisor at Off Site Art, which is ArtBridge’s sister organization in L’Aquila, Italy. Off Site Art was created after the 2009 earthquake left much of the city in ruins, and now it’s the site of the largest construction project in Europe with much of the city covered in scaffolding. He currently lives and works in the West Chelsea neighborhood of Manhattan. 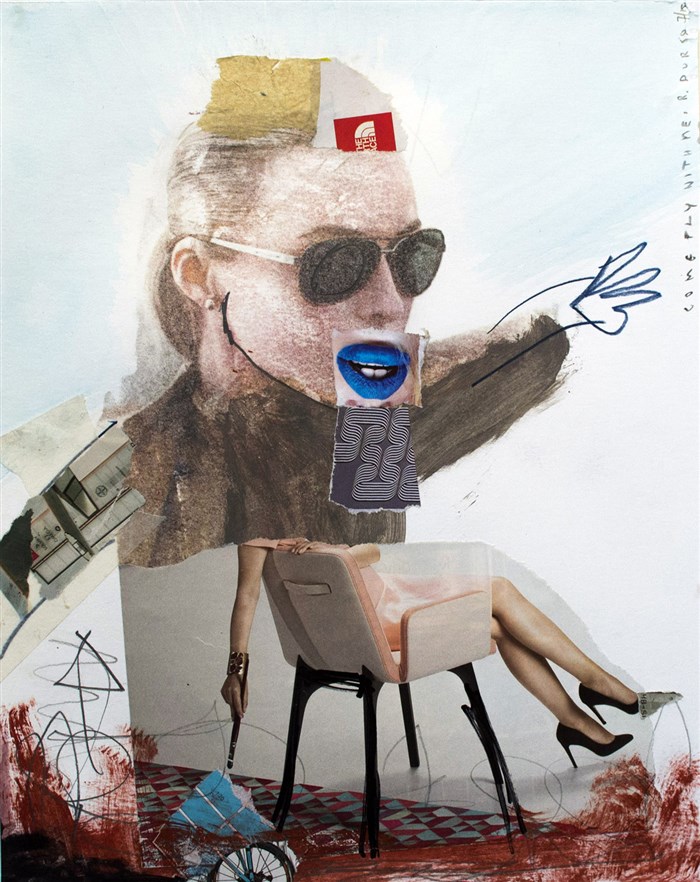 Luca Curci – What is art for you?
Rodney Durso – Good question. Art is self-expression, and a way of channeling ideas and emotions in a nonlinear, and visual fashion. It’s very personal, and it can be monastic. I tell people that making art full-time is like looking at myself in a mirror all day. I can’t do it. In fact, I can’t make art all day, every day. It’s too much. But I can work for 3-4 hours at a time, then I come back the next day, or two days later. I need to come back to a piece of work, and look at it with fresh eyes each time in order to know how to proceed and to understand what comes next. It’s a process that’s intuitive, random and sometimes makes no sense.

LC – Which subject are you working on?
RD – Currently I’ll be starting new work for two related, and pre-existing series. One is called ‘Signs and Symbols’, and the other I call the ‘Graffitti’ series. Signs and Symbols is based on large symbols I paint that seem to come from another language, or alphabet. They are similar to letter forms, or characters, but in actuality have no real meaning. I started making these as a warm up to my studio practice, I would come to the studio and begin to make these symbols as a way to start my work day. Eventually, as I saw people’s reactions, I began to take them more seriously and now they have become part of my repertoire and portfolio. As a graphic designer, perhaps this series comes from my love of typography, the symbols are like letter forms, but unlike type, I never repeat the same one twice (as far as I know, anyway). The Graffiti series is similar but the shapes and symbols I make are smaller and the styles are more random. I also use entire word and phrases, and more color, and use a variety of mediums; creating a kind of chaos on the page (or canvas), that starts to look like urban graffiti, or ‘tagging’. Where Signs and Symbols creates a zen-like feeling, the Graffiti series is more messy, energetic and random.

LC – What is the most challenging part about creating your artworks?
RD – Staying focused and on task when I’m not on a deadline. When there is a project deadline or a client commission, then staying focused is very easy. When there is an open period of a few weeks, then I can let time slip by too easily and procrastinate. As long as there is work to be done, I love working, and I’m okay.

LC – Are your artworks focused on a specific theme?
RD – Not really. I tend to work in a visceral fashion. My work is a mix of many things, and created in many ways. Sometimes viscerally, fueled by loud music and caffeine, other times I work quietly in a meditative fashion. My work pulls from emotions with influences from design, architecture, and music. I grew up looking at Klee, Miro, Kandinsky and Magritte and I listened to all sorts of music. I also draw heavily from good design; bringing that organization, methodology and hierarchy into my work. But in general I work from whatever angst, fear, doubts, anger, loss or energy I bring to the studio that day. I make art as my therapy – making art keeps me in balance. I love this idea that I may have coined that I call “ABC” or Always Be Creating. If I’m always creating, then life if good. 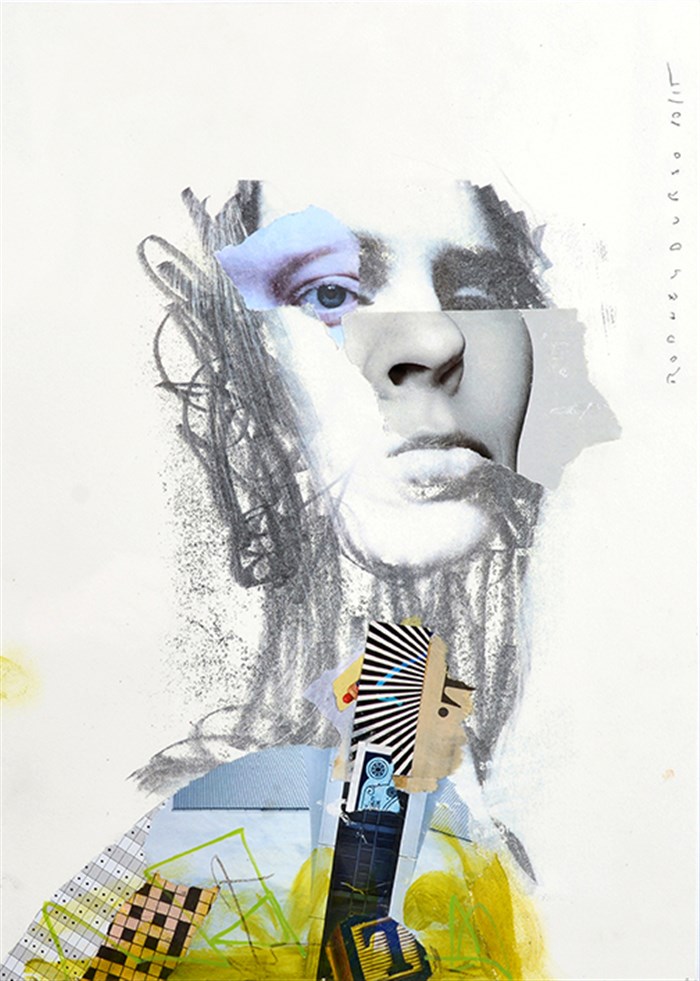 LC – Did your style change over the years? In which way?
RD – Yes. I started in 2005/2006 using only black India ink, then later; only India ink and pastel. My first pieces were only black and white, or black and red. I knew from my design work that I needed to work very simply because I didn’t yet know my “tools” — the paints, the paper, etc. Like in design, you can’t go very wrong with “simple”. Then as I became more confident and learned more techniques, I expanded into more unfamiliar territory, both materially and conceptually. Then in 2016, was accepted to The American Academy in Rome and there I worked solely with color Xerox and photo-collage. I spent two weeks there working on what became my first Trump series, during the early stages of the U.S. Presidential campaign. Working in Italy was great, especially with the references I could garner about Berlusconi’s administration and the similarities to Trump. That took my work in a new direction and gave me more confidence to explore unfamiliar materials and ways of working.

LC – What do you think about the concept of this festival? In which way did it inspire you?
RD – I’m guessing you’re referring to the show, The Body Language. I think the idea of live performances was great, and although my works are two-dimensional, I believe they have a visual dimension and depth of meaning that works in the context of the show. I had hoped to be there in person, but was unable to organize my calendar to make it work. In either case, the idea of the show was interesting and the videos of the performances were great. The Misericordia Archives are nicely located and a unique space to exhibit in. The theme of the show was also a nice tie in with the concurrent Carnival.

LC – Do you think ITSLIQUID GROUP can represent an opportunity for artists?
RD – Yes, I think the format works well and can bring new opportunities to emerging artists. The festivals are a good opportunity to exhibit internationally and the Venice based shows especially provide a unique experience for artists to show their work in the beautiful, historic spaces that ITSLIQUID Group manages.

LC – Did you enjoy cooperating with us?
RD – Yes, so far it’s been a pleasure.