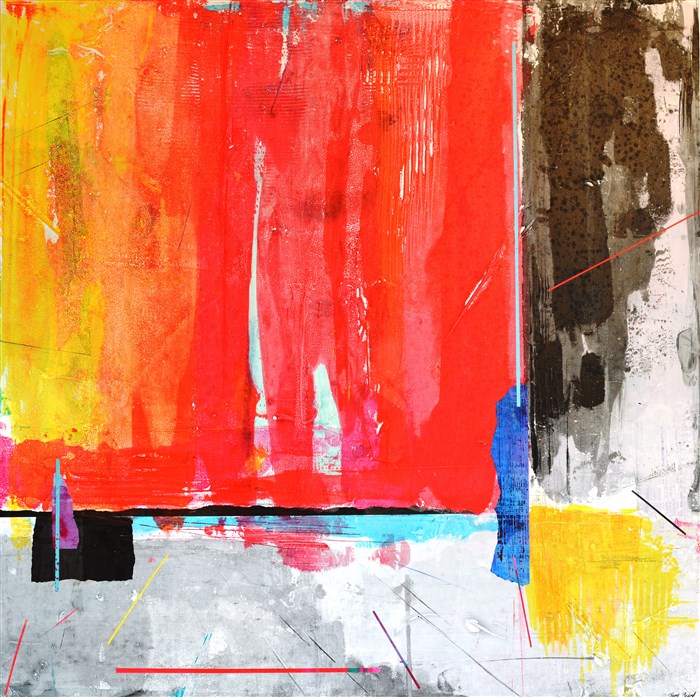 My childhood was spent in Canada, Ireland and Uganda, and on my return to the UK I attended the West Surrey College of Art and Design, gaining a B.A.(Hons) in Textile Design, followed by City of Birmingham Polytechnic, where I gained an M.A. in Textile Design. I practised as a textile designer and illustrator for several years before concentrating on the development of my own ideas for paintings. I have exhibited my work widely in the UK and America, taking part in numerous exhibitions and some Art Fairs. I also deal with corporate clients through agencies, placing work on a rental or sales basis in work places and offices. I am mainly interested in exploring ways of conveying a sense of depth, form and movement using abstract marks and elements such as blocks of colour and lines. In the last few years I have been influenced by man-made structures and mans’ intervention within natural and built environments, such as dilapidated industrial and agricultural buildings, artificial lights and building sites. I want my work to be ambiguous and to allow the viewer to make their own personal interpretation of it. I use a range of materials and processes to make my work, and over time have developed my own unique way of working. I plan or draw out ideas initially, but during the making intuitive decisions are made. I am always open to a serendipitous ‘accident’ and where I would once have ‘corrected’ these I now embrace the way they enhance the work or add an unexpected element. 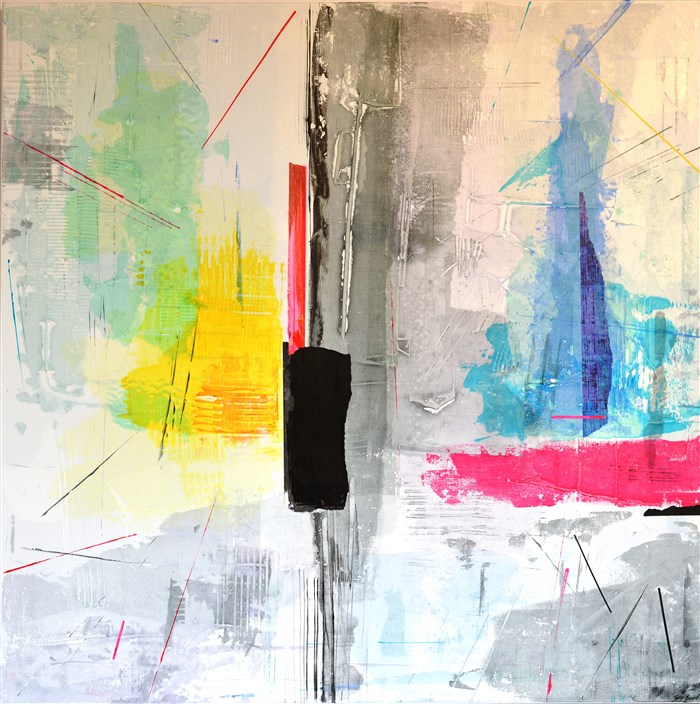 Luca Curci – What’s your background? What is the experience that has influenced your work the most?
Terry Beard – I was born in Canada and lived there for about 5years, then spent time in Ireland followed by 7 years in Uganda. This had a lasting influence on my work and in particular my affinity with colour. My time at Art college was also essential in the development of ideas and techniques, as it opened my mind up to possibilities and made me start really looking.

LC – Which subject are you working on?
TB – My ideas evolve gradually, some come from specific landscapes or objects, but mainly from observed and remembered influences, colour combinations, textures, arrangements and compositions. I have been influenced recently by man- made structures in the environment, buildings, windows, doors etc.

LC – What is your creative process like?
TB – As I said, ideas come from a sort of mental melting pot as well as some specific objects or places. I don’t try to copy anything or make the influence too obvious. My work is essentially an abstract representation of a place, time or feeling.

LC – Are your artworks focused on a specific theme?
TB – Not really, as work evolves slowly from one idea to another.

LC – How is being an artist nowadays?
TB – I think being an artist is hard, but has always been so. The majority of artists are not lucky enough to be picked up by a major gallery or collector, and end up working as teachers, commercial artists or on the checkout in the supermarket in order to survive!

LC – We were attracted by your last artistic production, has the artwork presented been created for the festival or as a part of preexisting works?
TB – The pieces in the festival are recent works, ones which I felt addressed the theme.

LC – Do you agree with our vision of art and what do you think about the theme of the festival?
TB – It is a great opportunity to show work in a different place and country. The theme is broad enough to include a wide range of approaches.

LC – Did you enjoy cooperating with us?
TB – Yes!

LC – What are your suggestions about our services? Is there something more we can provide to artists?
TB – Opportunities to exhibit in other places perhaps? The cost of shipping work and exhibiting is always a problem.

LC – What do you think about the organization of our event?
TB – A lot of hard work has been put into it.