British artist Terry Flaxton (b. 1953) has exhibited internationally since 1978. Originally he encountered sound, oil, etching, photography & film on entering Wimbledon College of Art in 1971 – then the video where he received a BA in communication design at the University of East London in 1979. Establishing himself as a Video Artist in the early years of Channel 4 he was commissioned to create work for Channel 4’s Eleventh Hour, then Ghosts in the Machine which aired on PBS (Alive from Off Centre) and French TV (Avance Sur Image). He produced a series of 5 programmes on Video Art for Channel 4 in 1986/7/8. He spent many years working as Cinematographer and as a writer, director, producer and editor on productions for channel 4, and the BBC including US and Soviet Foreign Policy in the 3rd World with Noam Chomsky and Jonathan Steele. As a cinematographer he worked on promos for Queen Latifa and Van Morrisson and for MTV and Polygram with Def Leppard, Stones, Blink 182, John Mclaughlin; he won cinematography awards and shot the 3rd electronically captured movie to be released on 35mm (Channel 4/British Film Institute, 1986). In 2007 he became one of the first practice-based Creative Research Fellows in the UK, a Professor of Cinematography and Director of the Centre for Moving Image Research (2013), and in 2018 gained a PhD in High-Resolution Imaging. His work has been exhibited at over 200 festivals, museums and galleries and he has won prizes at festivals such as Locarno, Montbeliard, Amsterdam and Algiers. He has had retrospectives at diverse locations such as Moscow, Algiers, Dublin, Rome, Ljubljana and Mill Valley. His work has also been written about and featured in A History of Video Art, Diverse Practices and A Directory of British Film and Video. His works are held in collections including Lux London, Video les Beaux Jours, Strasbourg, Filmmakers Cooperative NY and AICE Milan. 4 Recent exhibitions in New York Cathedral attracted over 1 million visitors each. His 2008 work “In Re Ansel Adams” is in the permanent collections of the Harris Museum in Preston and the RWA Bristol where he is a lifetime academician, an honour accorded to only 160 living academicians. He became a lifetime Fellow of the Royal Photographic Society in 2020.

Luca Curci – What are you currently working on?
Terry Flaxton – I am always working on several new works at any one time – but for 12 months now I have been all the time working on a large scale piece which has 8 parts called The Human Gaze in an Age of Quantum Entanglement. This work charts our move from the analogue to the digital, and from the digital to the Quantum.

LC – What’s your background? What is the experience that has influenced your work the most?
TF – From a young age I was impressed by the idea of the Renaissance Man, where all knowledge and all art forms and sciences were part of the same practice – so effectively if you developed a skill with music, you could also be competent withdrawing or maths. When I retrained after spending some time composing I entered a course which argued that all skills were about competence, that if you took that competence and left behind the details of the skill – then you could apply that competence to other skills. So if you had learned the principles of photography you could use those, in a different way, by creating sound work, or video work, or painting, or digital composition.

LC – Did your style change over the years? In which way?
TF – All of my work has explored the tension between representation and abstraction (and its deeper form of non-objective art). I spent some years as a cinematographer, a skill where you have to love both physical form and the light that brings form and structure to life – and whilst practising cinematography I learned to help others express themselves which in turn helped me to express myself – to the point where I have “found my own voice”. Abstraction is not dissimilar to representation – you use all the same fundamentals of light colour and sound – and because of exploring these in representational forms I now find it easy to do just the same in abstracted and non-objective forms.

LC – What is your creative process like?
TF – I do not draw a distinction between creative and supposedly non-creative processes. For me, it is all about process and maybe more importantly, faith that a process will reveal the truth. If you’re a skier setting off down the hill, you must have faith that the processes you’ve learned will help you deal with any obstacles that arise – and importantly, obstacles are what make the trip down the hill that much more pleasurable and interesting. When you make something you’re always aware that the audience is far more clever than you – because they will immediately see the synchronicities and coincidences that you may have been unaware of. It is important not to “know” too much, otherwise, your work will become moribund and uninteresting.

LC – What is the most challenging part about creating your artworks?
TF – I have been practising art for a very long time now – some 50 years. There is nothing torturous or difficult about creating work. It is a huge privilege to be able to make work that people wish to see (if they didn’t want to see it I would’ve stopped a long time ago). All work is completed by the audience’s attention and possibly the most challenging thing is to face one’s audience as they know what is important and respond when you find your voice sufficient to express what is important to them in such a way that many different minds have access to what you are trying to accomplish.

LC – We were attracted by your last artistic production, has the artwork presented been created for the festival or as a part of preexisting works?
TF – All of my work arises from a long long journey that I set out upon many years ago. As a metaphor, I like to use Yves Bonnefoy’ conception of l’arrière-pays, which when translated is rendered as “the back country” or “the hinterland”. L’arrière-pays is a metaphor for the idea of a place that a person craves to try to glimpse something that says something about themselves that they cannot find in normal reality. But this can only glance fleetingly when we enter the hinterland to perhaps get a sense that something is trying to alert us that there is something extraordinary about living here, now, in this reality – but is hinted at in the back roads and small discoveries of life – and there’s necessary melancholia involved in that feeling too. Bonnefoy speaks about this sensibility as being a comment on the realities we all live within which has magic within it that we sometimes forget.

LC – In which way will the artwork presented in our exhibition is connected with the festival’s theme?
TF – My moving image artwork Another Sun is a homage to Andrei Tarkovsky the Soviet Auteur Director and his poet father Arseny Tarkovsky – the voiceover is in Russian, and the subtitles are in English. This work connects with Canvas, the festival’s theme – even though it has a specific reason for its creation which is to imaginatively engage with the idea that there are other sentient creatures in the universe and so discusses whether they will also experience the concerns that worry humans. Though my choice was to use a Russian subject and a Russian voiceover as a direct political action in an exchange of ideas and contact between not only other artists, designers and art professionals – but also the audience itself – but also specifically at this time when Russia has invaded Ukraine, where peace is foremost in peoples hearts, I wish to speak about language and ideas and communion rather than aggression.

LC – What do you think about ITSLIQUID Platform?
TF – ITSLIQUID has an interesting platform for artists. If artists apply and curators like their work, the artist can then choose when and where to exhibit.

LC – Do you think ITSLIQUID GROUP can represent an opportunity for artists?
TF – Often with the art world and the system that has emerged over many years, there is a very narrow route for artists to explore and exhibit and in fact this route is closed to many talented artists because it’s about who you know – ad who knows you. 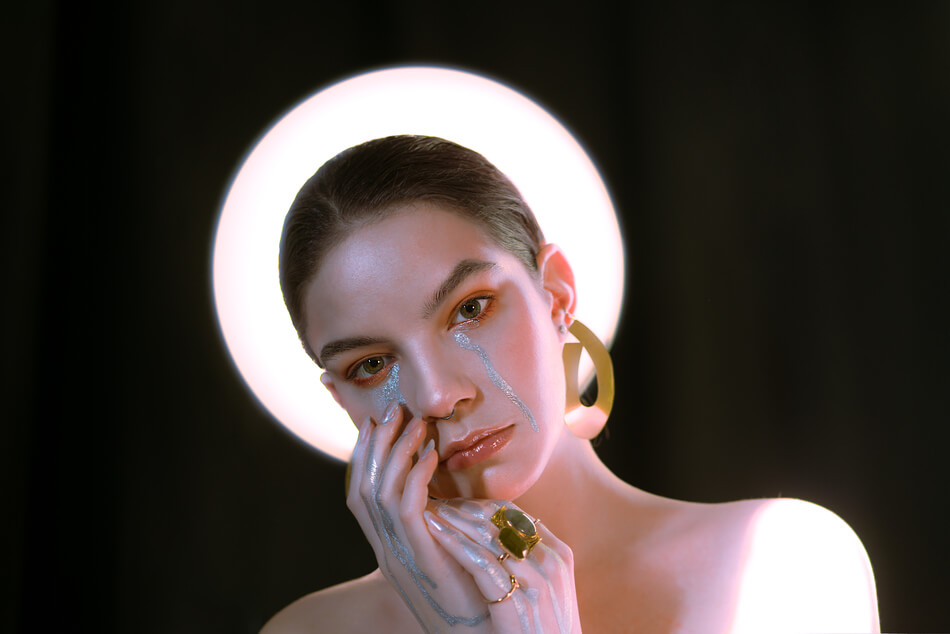 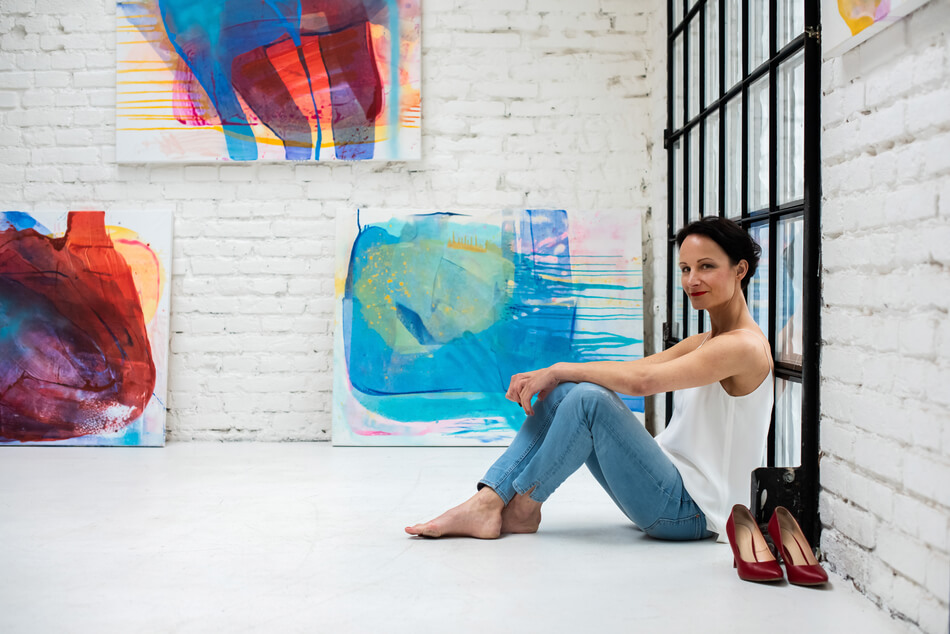 Radka Vom (Radka Vomáčková Čaplová) was born on November 5th 1976 in Prague. Studied at a grammar school, a local medical college, took language courses both in Prague and Oxford, 4 semesters at the Faculty of Law at Charles University in Prague. Read more