Museo Reina Sofía presents Madrid Meridian: Dream and Lie, a site-specific project by Pep Agut (Terrassa, Barcelona, 1961), created for the Palacio de Cristal (Crystal Palace) in Madrid’s Retiro Park. The artist explores the historical context in which the palace was built (designed by Ricardo Velázquez Bosco and inspired by Joseph Paxton’s Crystal Palace in London), between 1884 and 1887 for the General Exposition of the Philippine Islands.

The title of the exhibition refers to two crucial aspects in the development of the project. On one hand, the “Madrid Meridian”, which has its origins in October 1884, when an international conference held in Washington DC led to the approval of a single international reference meridian, tangent with the position of the Royal Observatory in Greenwich, England. That same year, Spain made a failed attempt to establish a 0° meridian of Madrid (3° 41 ́16 ̋west of Greenwich, and 14 minutes, 41 seconds ahead of it). A few years later, the nonexistent Madrid Meridian was also taken as a reference on the texts and maps of the catalogue of the General Exposition of the Philippine Islands, inaugurated in the Palacio de Cristal in 1887. The disaster of the Spanish-American War in 1898 made the Madrid Meridian completely unsustainable. Nevertheless, the dictator Francisco Franco determined in 1942 that Spain would finally adopt the time zone on the meridian of Berlin, a decision whose impact is felt to this day.

The texts of the catalogue edited by the Spanish Government for the General Exposition of the Philippine Islands have been one of Agut’s main sources in order to create this project, alongside with the work of two very famous Spanish painters that echo in the second part of the title: Dream and Lie, referencing Goya’s El sueño de la razón produce monstruos (The Dream of Reason Produces Monsters, 1799) and Picasso’s Sueño y mentira de Franco (Dream and Lie of Franco, 1937).

The work is articulated on the basis of several plaster columns that replicate one of the columns inside the building. The mold for making them, a process carried out in six parts, is understood as an intermediary element that records every detail, like a photographic negative, of this specific object designed and built at a particular moment, which will be conditioned as it reappears in the exhibition by the variables of the material used for its reproduction. The resulting objects never cease to bear traces of the construction process, but their horizontal arrangement removes every sign of their original functionality. The individuality of each column or of each of the parts and sections that came out of the molds is completed with a series of inscriptions by the artist, made using the same tool, the burin, as the engravings of Goya and Picasso, especially Goya’s etching El sueño de la razón produce monstruos (The Dream of Reason Produces Monsters, 1799) and Picasso’s Sueño y mentira de Franco (Dream and Lie of Franco, 1937), one of the preliminary studies for Guernica. In this way, Pep Agut rests upon and continues the line of critical thought in art that reacts to political circumstances adversely affecting the whole of society.

The large set of plaster tubers arranged next to the columns, taken from molds extracted from seven natural rhizomes, reiterate the ideas articulated through the columns. While some tubers refer to their remote colonial origin, Agut associates them sarcastically – he calls them “little Francos” – with those appearing in Picasso‘s depiction of the dictator in the eighteen small vignettes that make up the set of engravings mentioned above.

Madrid Meridian: Dream and Lie invites us to reposition our gaze, demand another perception of spatiality, and perform a different reading of the historical context in which the palace was built and its parallels to present times. 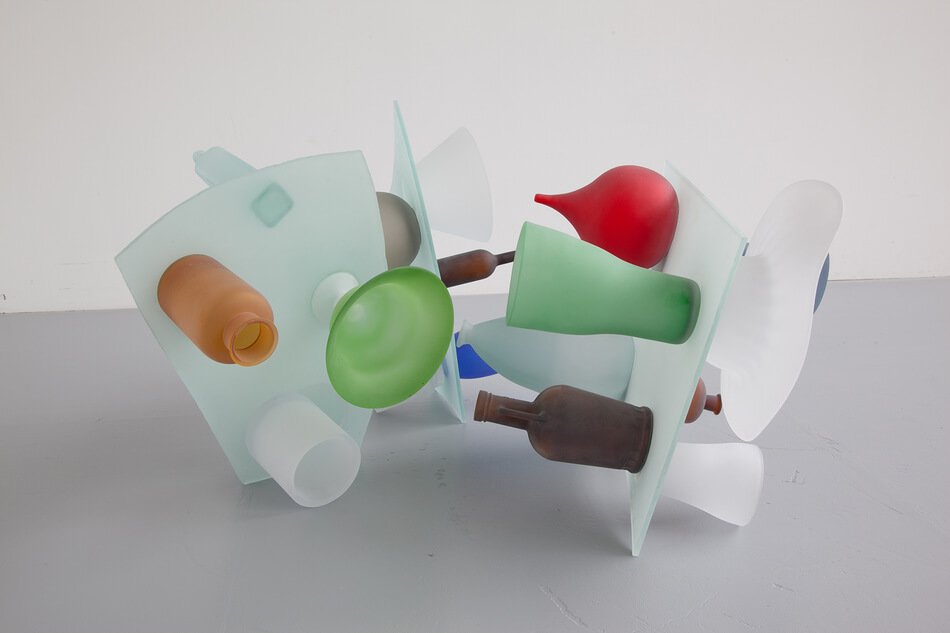 Opened in 3 December 2021, the exhibition retraces the most significant stages of the English sculptor Tony Cragg's carrer, starting with his assemblages, historical works of large dimensions. Next to these important masterpieces from the past are exhibited a variety of more recent works reproducing Cragg's new curiosity for the various effects of colored glass and reflecting, the research path undertaken by the artist in the last years on the concept of the fluidity of glass. Read more