Designed by Ben van Berkel / UNStudio, CapitaLand’s new Raffles City is a sustainable urban hub for living, working and leisure located in Hangzhou, one of China’s most picturesque cities. It forms the eighth Raffles City development in China.

Situated in Qianjiang New Town near Qiantang River, this mixed-use development becomes a major landmark along the green axis of the city’s new CBD. A rich mix of 24/7 functions occupies almost 400,000m2 within two streamlined towers set atop a podium and landscaped plaza. Conceived as a lively vertical neighbourhood and transit hub and featuring stunning views of the river and West Lake areas, the sixty-storey, 250 metre-tall highrises contain residential units, Grade A offices, the Conrad Hotel and a rooftop helipad; the 116,000m2 six-storey podium accommodates retail, restaurants, leisure facilities and parking and has a direct underground connection to the metro.

“Raffles City Hangzhou will be a point of confluence, a hub for business conduct and a new destination for visitors and residents alike; an ‘all-in-one’ destination for working, living and leisure in a highly sustainable environment.” Capital of Zhejiang province, the city is steeped in tradition with a view to the future. Located 50 minutes by high-speed train from Shanghai, Hangzhou has become an economic powerhouse within China today thanks to a strong tech sector. While the city’s heritage focuses on the picturesque UNESCO heritage-listed West Lake, its future points to a new economic, political and cultural centre orientated towards the river.

With strong future ambitions especially concerning sustainability, economy and livability, Hangzhou is a city on the move. In light of the impacts of urbanisation worldwide, UNStudio posed the question: How can we utilise a dense, mixed programme as part of a transit-oriented development to stimulate sustainable living and improve quality of life? The project furthers the practice’s ongoing research into Superliving, in this case into (integral) strategies to create sustainable, healthy cities that offer a high quality of life, while addressing future needs for greater efficiency and density in cities in times of rapid urbanisation and growth.

The building is designed with a carefully considered mix of programmes – like those found in a good city – that bring together a wide range of users. Besides working and living at Raffles City, people can stay at the hotel, or pick up groceries, enjoy a meal, do exercise, watch a movie or even get married there, all in one interconnected environment. As such it not only provides residents and those working or staying in the complex with a healthy and socially integrated environment, it also ensures that programmes are active around the clock, creating a safe and lively neighbourhood for all.

Informed by the city’s famed natural landscape, UNStudio‘s design creates a local identity for Raffles City, while celebrating its trademark ‘city within a city’ concept. Reflecting the movement in the river, the tower design features a wave-like motion. These concentric waves increase in their dynamism, starting calmly at the base and building up more vigorously along the vertical axis. These formal expressions enabled us to connect the wide variety of programmes throughout the building into one seamless flow. The design contributes to the landscape character of this green city. Situated diagonally opposite the civic centre, the corner site borders both the urban built-up context and green axis/city park that connects West Lake to the Qiantang River.

The architecture of the two towers consolidates these two contexts in one gesture whereby the urban face of the building twists towards the landscape, while the landscape aspect, in turn, acknowledges the urban context. The towers are not identical but, rather, complementary, as if engaging in dialogue. The plan is organised as two diagonal and intersecting figure-of-eights. Positioned on opposite corners, each tower consists of an ‘urban facade’ that frames the urban corner of the site, and a horizontally articulated ‘landscape facade’ that descends into the inner courtyards at podium level.

The main entrance to the south appears as a prominent gateway from the city park and civic centre. The east-west orientation of the towers minimises overshadowing while maximising daylight for the residences and offices. The design of the tower and podium facades interplay contrasting textures. Clad in a shimmering scale-like skin of aluminium tiles, the podium facades reflect the building‘s activity and landscape to offer pixelated perspectives. The towers feature an outer layer of rotated, vertical solar shading fins, placed atop the curtain wall system. Accentuating the tower‘s characteristic twist, they also frame internal views.

Catching the light throughout the day, the lines of panels add a luminous texture to the facade. By night the curvilinear silhouette lights up: this reinforces the building‘s prominence and minimises the building’s light pollution as only the outline is illuminated.

Situated at the centre of the retail spine, a spectacular atrium forms the organisational and visual focus of the podium interior. The atrium is designed as a spiral of overlapping layers, creating seamless connectivity and extensive sightlines between the spaces. As a feature detail the bamboo handrail echoes the building’s curvilinear form. Winding its way around the podium as a continuous ribbon, it adds an element of tactility and natural contrast with the futuristic interior. From here two diagonal voids ascend seven storeys through the opposite wings of the retail spine.

As an intuitive finding device, the voids guide visitors along each wing that spans almost 150 metres in each direction. Abundant daylight streams through the atrium and voids right down to the lowest floors, introducing a unique outdoor quality to the podium interior. Looking up through the skylights, the towers are always visible from the main atrium, changing appearance depending on the viewing point. As the scale of the fluid forms transition from the architecture to the streamlined interior and winding handrails, this results in a cohesive spatial experience – as if outside merges with inside.

An inclusive approach to sustainability is integral to UNStudio’s design philosophy. The incorporation of natural ventilation, solar gain and daylighting principles tailored to the local context, efficient structure and the ways in which materials are employed all work in concordance with one another to lower the energy and material demands of the building. Raffles City Hangzhou is the first retail mall in China to use natural ventilation on a large scale and has achieved Gold LEED certification.
With social sustainability in mind, the programme mix creates a dynamic, continuous 24/7 cycle of activity that encourages public participation and engagement. 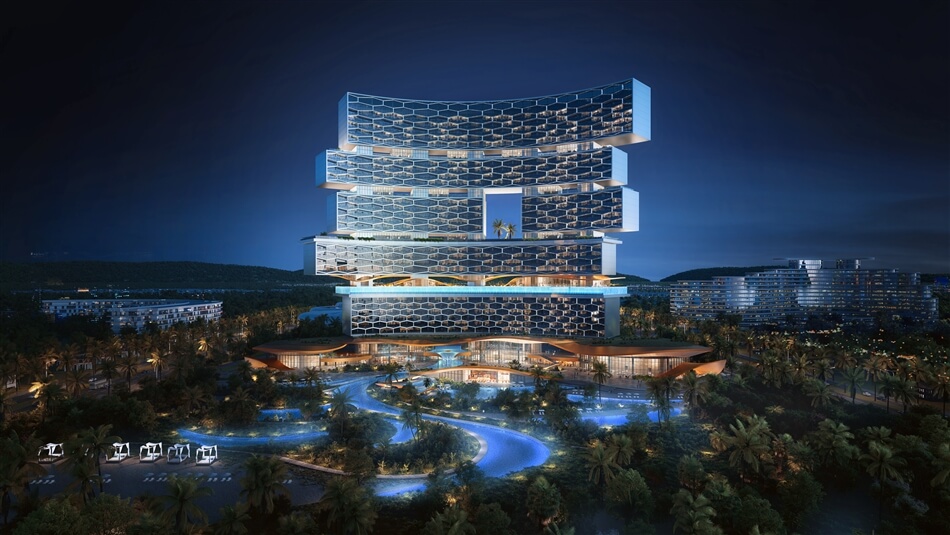 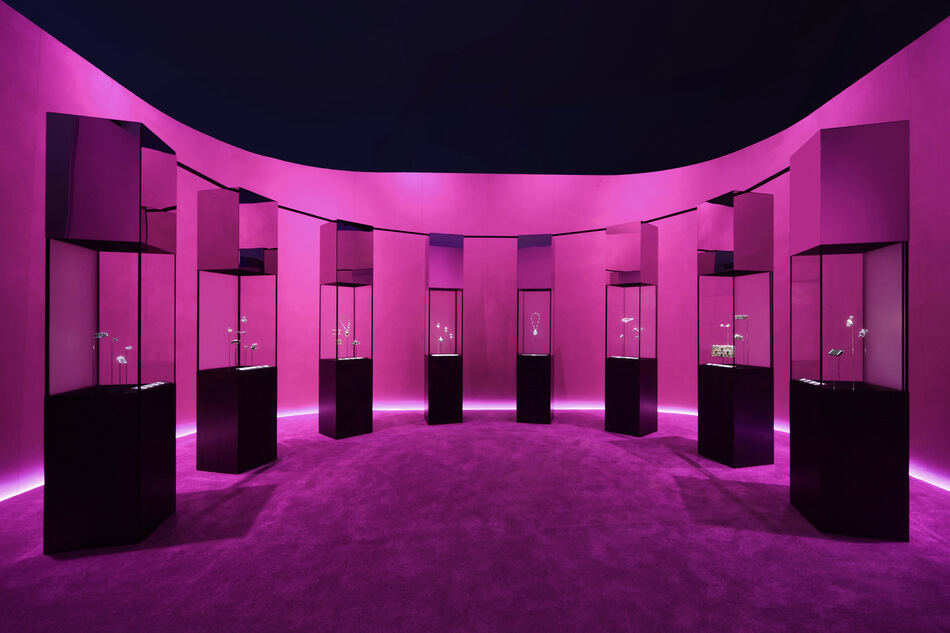 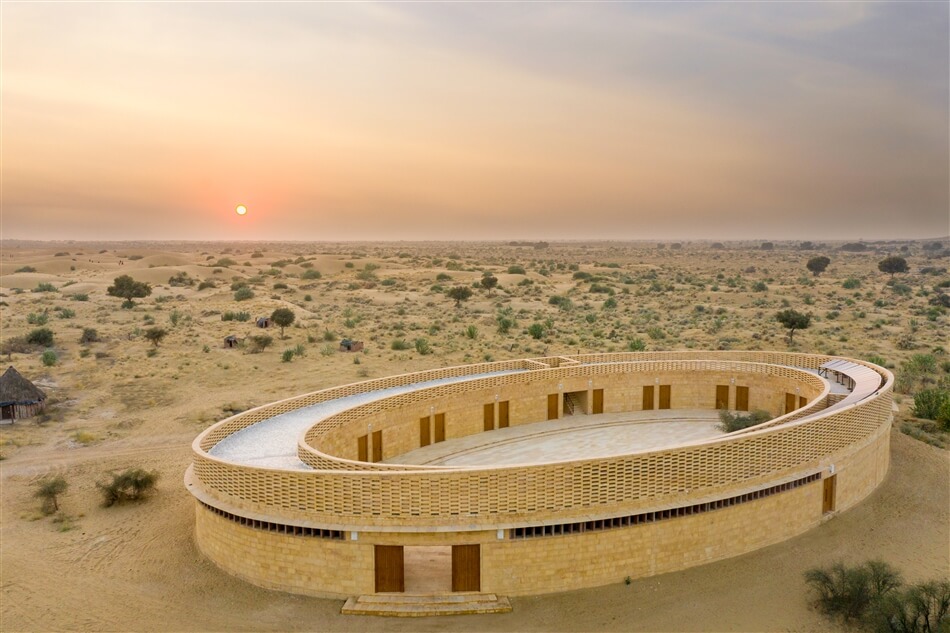 Sitting atop numerous acres in the heart of the mystic Thar Desert in Rajasthan, India, stands The Rajkumari Ratnavati Girl's School - a fantastical oval sandstone structure that blends seamlessly into the arid landscape. Set to open in July 2021, the school will serve more than 400 girls, from kindergarten to class 10, that live below the poverty line in the region where female literacy barely touches 36 percent. Standing as a beacon in its desert kingdom of Jaisalmer, The Rajkumari Ratnavati Girl's School was built to improve the lives of the community. Read more